Unpermitted welding likely sparked a $10 million blaze that was then fueled by epoxy coatings last summer at a U.S. Army high-security research lab in Maryland, a new report indicates.

Two contractors working on the construction project were treated for smoke inhalation in the blaze, reports said. 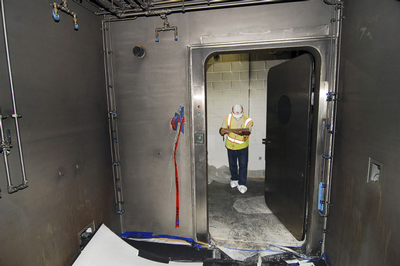 Courtesy photos
The containment labs' airtight design may have contributed to the fire's rapid spread. The lab will host research on "dangerous and exotic agents" and fatal viruses.

The cause of the fast-moving fire at the $653 million, 835,000-square-foot building was not released.

However, the Frederick News-Post has now obtained an Oct. 15 report of the investigation by the U.S. Army Corps of Engineers, which was overseeing construction. The USACE report found that:

The report, obtained under a Freedom of Information Act request, also noted that the building's fire-alarm system had not yet been activated, although about 300 people were inside at the time and safely evacuated, the paper said.

The structure, about 95 percent complete at the time, is to house the world's largest BSL-4 lab. Built to handle "dangerous and exotic agents" and fatal viruses, the lab block was designed to be sealed and airtight.

Workers had to swipe an access card to enter the area; the welder closest to the fire was authorized to be there, the report said. The welder worked for SSM Inc., which did not respond to the newspaper's requests for comment.

The report said the welder had "a fire blanket and fire extinguisher" when he noticed fire coming from an epoxy-coated room he had left minutes earlier. The Army Corps said that workers at the site had not had the appropriate permit for the welding operations.

A slick "biocontainment" epoxy coating on the walls, ceiling and floor of the research labs may have fueled the fire, the newspaper said, citing the report. The coating had been sprayed on to create a smooth surface on top of concrete, to minimize the spread of chemicals or organic material, according to the report.

Previous welding "multiple times" in the building had caused the coating to bubble and char, the report said.

In this case, however, the two finishing coats sprayed on the walls "were likely the primary fuel source and the first substance to ignite," the newspaper said.

USACE reported: “There is no indication that anyone ever knew or communicated that the biocontainment coating system ... was highly combustible in its cured state."

Tom Dudick, president of Ohio-based Dudick Inc., told the newspaper that the coating system "poses less of a fire risk than common construction materials such as wood, drywall and cardboard, which were also present when the fire started."

“In our 44 years of business, we have never had an incident similar to this, and we fully stand behind our product,” Dudick said in an email to the newspaper.

The completion date of the project, originally set for December 2014, has been pushed back to May 2015.