Contending that local is better for coatings and services, a network of regional manufacturers has developed a new alliance to give them national clout.

Aiming to increase its specifying and selling power across the U.S., the new National Paint Alliance will broker multi-state paint and coatings agreements that can then be filled, supported and serviced locally, says Jeff Child, a paint industry veteran who is NPA's new executive director. 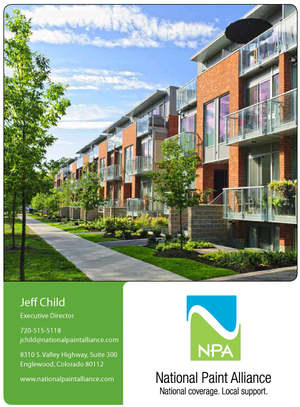 NPA
The National Paint Alliance plans to broker national coatings contracts that can then be filled and serviced locally.

Regional paint companies "decided that if they wanted to compete nationally, they couldn't do it alone," said Child, an alum of Kwal Paints and the Comex Group (both now part of Sherwin-Williams in North America). "The only way they could remain relevant in the national game was to partner together."

The nine charter members of NPA (and their headquarters) are:

When the companies' U.S. distribution territory was mapped, "it was almost like these pieces to a puzzle," said Child. "There was very little overlap."

In all, the group distributes directly to about 90 percent of the U.S., said Child. The other 10 percent (mainly in the New England region) will be serviced by independent dealers, he said.

NPA members say they can provide better coatings and support for a project than a "one-size-fits-all" formulation sold by a national coating supplier.

"You can’t make a gallon of paint and send it across the whole U.S. and expect it to work the same way," said Child. "There are so many different climates in this country."

An exterior coating, in particular, will not perform the same in Seattle, Phoenix, Orlando, Minneapolis and New York, he says. And yet, big-box and hospitality chains, retailers, developers and other large owners may have structures in all of those areas, and more.

"The National Paint Alliance understands the marketplace dynamics and the need for performance-proven regional formulations along with local expertise and rapid response," Child said.

"Meetings with a breadth of national account managers allowed us to determine that national chains—from Target to Wal-Mart, from Hilton Hotels to Marriott International, and from Cushman & Wakefield to Winn Companies—are limited in their ability to specify anything other than coatings from a national product portfolio."

He called NPA products "the better alternative" to national formulations.

Child also contends that local painters prefer to work with local and regional suppliers. "We can really help [large owners] with their painters," he said.

Local flexibility means that contracts, billing and pricing can all be customized to the project and owner, he said.

And local manufacturers are better informed about local environmental conditions, regulations and color preferences, he adds. Each vendor guarantees exact color matches and "100% color fidelity to whatever national manufacturers' color is specified."

"No longer will specifiers, including the architects who start the specification process at the very beginning of a construction project, have to depend on a one-size-fits-all scenario for their paint and coatings requirements," said Child.

The charter members originally came together as members of the Coatings Research Group International, an Ohio-based group of companies founded in 1956 that share research and development, said Child.

Child said he did not consider NPA in competition with the ACA.

The ACA, which represents coating manufacturers, declined to comment on the new NPA.

The National Paint Alliance will work through a coordinated network of 400 field representatives, 16 manufacturing facilities, and 520 retail stores across the U.S. and Canada, NPA said.