Significant deterioration, weathering and corrosion caused a walkway collapse that killed a firefighter last month at the University of Missouri, engineers have found.

A "concrete shear failure" was responsible for the collapse of an elevated exterior walkway Feb. 22 at the University Village housing complex in Columbia, MO, according to a recent report by structural engineers, authorities and local news outlets.

A 23-year veteran of the Columbia Fire Department died while working the accident scene. 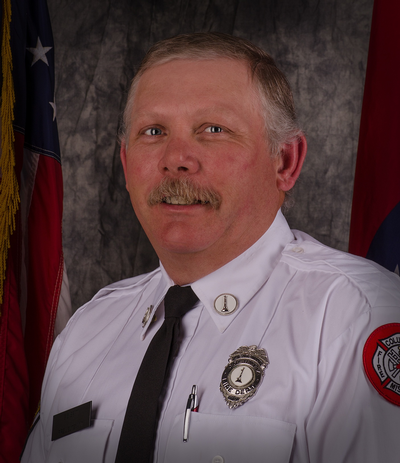 Columbia Fire Department
Lt. Bruce Britt, 48, suffered fatal injuries when a section of the apartment walkway he was standing on gave way.

Residents in the 12-unit building reported hearing a loud crash about 4 a.m.

A graduate student who lived on the second floor said the walkway had appeared to be falling, so he called 911, reports said.

The University Village complex, consisting of 14 buildings, was constructed in 1955 and houses nearly 100 people. About 18 residents were home when the incident occurred, reports said.

Lt. Bruce Britt, 48, suffered fatal injuries when a section of the walkway he was standing on gave way.

Reports said he had been trying to assist residents who were being evacuated through windows. Britt was taken to a local hospital, where he was pronounced dead.

Britt had worked with the Columbia Fire Department since May 1990. The lieutenant had been a member of the fire department’s Hazardous Materials Team and Technical Rescue Team.

Following the incident, a team of engineers from Trabue, Hansen & Hinshaw Inc., of Columbia, conducted an analysis of the debris, as well as other buildings at the complex. The team's observations were released to the Columbia Daily Tribune via a records request March 6.

A copy of the "Cause of Failure Report" is available here.

“In general, the walkway support beams, metal deck and concrete slab were all found to be significantly deteriorated,” structural engineer Patrick Earney, PE, wrote in the report.

Parts of the collapsed walkway showed signs of heavy corrosion, delamination and severe weathering, he noted.

“In addition to the deterioration at the outer edge, a few longitudinal cracks in the steel deck were observed that extended nearly the full width of the walkway.”

The report found that the “collapse was a result of a concrete shear failure along the outer edge.”

“It is likely that water and chlorides, and expansion from freeze-thaw action, combined to deteriorate the concrete to the point where its shear strength could no longer support […] the self-weight of the walkway,” the report related.

The loud bang residents heard was likely the shear failure itself, the engineer added.

Engineers also found at least three other buildings at the complex with walkway framing in "questionable" condition, according to the Columbia Daily Tribune.

The engineers reportedly said "a catastrophic collapse could be imminent" at those locations.

Other issues were also present in six other buildings at the aging complex, the newspaper reported.

Residents of the University Village were housed in hotels while workers braced remaining sections of complex walkways per the engineers' recommendations, reports said.

Crews inspect the campus properties at least once a year, but records are not provided unless they find a problem, university spokesman Christian Basi told the news bureau.

"A draft of the university's Graduate and Family Housing Master Plan, a document that was released in 2008 but never finalized, said [the University Village] walkways created a 'public safety hazard' in their deteriorated state," the newspaper reported.

The draft plan recommended demolition of the facility.

Several tenants have asked to cancel their leases at the complex due to safety concerns, according to a local television station.

University officials say they are helping those tenants find other places to live.

However, they plan to keep the University Village open for the next few months while they decide long-term plans for the apartments, according to reports, citing Basi.

All buildings throughout the university’s campus were inspected after the collapse, according to school officials. Details of those inspections should be available in the coming months, reports said.