President Obama wants to put a $302 billion tourniquet on a federal transportation budget that is quickly bleeding itself dry and infuse new maintenance funds into aging infrastructure, the White House announced Wednesday (Feb. 26).

Funding for transportation projects is "going to be in jeopardy unless Congress passes this new transportation bill," Obama said, adding that he planned to send the budget to Congress next week. 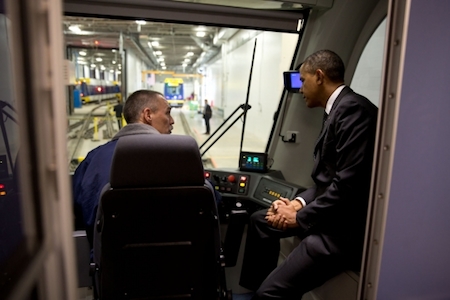 In the meantime, the White House published a fact sheet outlining Obama's plan.

According to Obama, the $302 billion proposal would help rebuild transportation infrastructure in a "more responsible way" by doing it over four years, instead of short-term increments.

The current transportation funding bill, Moving Ahead for Progress in th 21st Century (MAP-21), is set to expire in September. The bill announced Wednesday would reauthorize funding.

"A third of all major U.S. roads are in 'poor or mediocre condition,'" Foxx said in January. "We face more than $86 billion in backlogged transit maintenance. As many as 100,000 bridges are old enough for Medicare."

Part of the problem, Foxx said, is that funding has been addressed only in short-term increments. That is problematic for state and local governments that need to make long-term investments and plans.

Obama said, "There's no faster way or better way for Congress to create jobs right now and to grow our economy right now, and have a positive impact on our economy for decades than if we start more projects and finish more projects..."

The fund, which supports highway and mass transit programs, had $11.6 billion at the end of January.

DOT has started a ticker showing how much money the fund has left, with monthly updates planned until the fund runs out or is righted.

"This is one of Congress's major responsibilities—helping states and cities fund new infrastructure projects. ... If Congress doesn't finish a transportation bill by the end of the summer, we could see construction projects stop in their tracks, machines sitting idle, workers of the job," Obama said.

In his proposal, Obama wants to invest $206 billion in the country's highway system and road safety, increasing the amount of highway funds by 22 percent annually.

Obama also wants $2.6 billion and policy reforms to create "ladders of opportunity" to enhance existing highway and transit programs. Of this, $2.2 billion would be for a new bus rapid transit program for fast-growing regions, and $400 million to train and enlarge the construction workforce.

An additional $10 billion would go to a multimodal freight program for rail, highway and port projects.

The proposal will prioritize "Fix-it-First" investments, including policies and reforms to put the most urgent  infrastructure repairs on the front burner.

If America doesn't get the ball rolling on these projects, it risks being outpaced by other countries, Obama said.

"Now, other countries are not waiting to rebuild their infrastructure. They're trying to out-build us today so they can out-compete us tomorrow," Obama said. "So the bottom line is there's work to be done, workers ready to do it. Rebuilding our infrastructure is vital to business."

TIGER invests in projects that will have a significant impact on the nation or a region. This year, the program will emphasize projects that support affordable transportation to improve community connections.

"Mayors and governors, city councils, state legislatures, all of you who are watching here today, if you've got a great idea for your city or your state, then let us know your plan," Obama said.

"If it will encourage economic activity and support local businesses, and help put people to work, then your country is interested in partnering with you."