In a case closely watched across the building industry, a Hawaii construction contractor has won a major victory on appealing a contract suit against the government.

The case, which dates to 2007, involves a construction contract to build 212 housing units at the Marine Corps Base in Kaneohe Bay, Oahu.

In 2002, Kailua-Kona-based Metcalf Construction Company won the Navy contract to build the housing units for just under $50 million, according to the Feb. 11 case opinion. 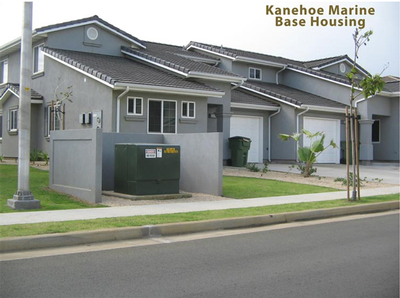 www.metcalfwest.com
The case involved a contract to build 212 housing units at the Marine Corps Base in Kaneohe Bay, Oahu. The contractor said it had spent more than $26 million out of pocket to finish the project.

However, the contractor said it ultimately spent roughly $76 million for construction, due to problems with the soil and other issues.The housing project eventually saw 32 contract modifications.

The government countersued over the delays, seeking a specified amount for each day the project ran past deadline.

Metcalf's lawsuit went to trial in 2010. That court determined that Metcalf had failed to establish its case and awarded the government $2.4 million on its counterclaim. The court said Metcalf needed to prove that it had been "specifically targeted" by the Navy in the course of the contract.

The decision seemed to have an unprecedented impact on federal contracting law and prompted a flurry of "friend of the court" briefs on appeal from the design/build industry, including the American Institute of Architects and the Associated General Contractors of America.

Specifically, AGC said, "the lower court turned what had long been a duty to cooperate, and not to hinder performance, into a far more limited duty not to act in bad faith."

Now, the U.S. Court of Appeals for the Federal Circuit in Washington D.C. has agreed with the industry groups and Metcalf. It vacated the previous decision Feb. 11.

The three-judge panel remanded the case for further proceedings and application of the correct legal standards.

“I am elated with this result, which restores my faith in this country’s legal system,” Terry Metcalf, the owner of Metcalf, told bizjournals.com.

“Hopefully, this decision will put me back on the path to justice.”

The opinion said the trial court had “misread” a case it had relied on and had “misinterpreted” provisions of the contract relating to Metcalf’s claim.

"[T]he trial court's standard of judging the claim of breach of implied duty of good faith and fair dealing was improperly narrow," the court said.

One of the main points at issue in the case was the “Differing Site Conditions” clause.

In its request for proposals, the Navy said soil at the site had a “slight expansion potential,” as evidenced in a soil reconnaissance report it had commissioned.

But the Navy said that its soil report was “for preliminary information only” and that the contractor should complete its own investigation.

The contract also incorporated Federal Acquisition Regulation (FAR) 52.236-2, 48 C.F.R. § 52.236-2, which concerns site conditions that differ materially from those disclosed in the contract.

Gambling Below the Surface

After Metcalf was awarded the contract and conducted its own soil evaluation, it determined that there was “moderate to high expansion potential” of the soil, which would significantly increase the project's cost.

The Navy and Metcalf were in discussions on this issue, which led to a project delay of roughly a year, the court said. Finally, Metcalf addressed the issue without approval from the Navy.

The trial court interpreted the clause as assigning the risk entirely to Metcalf.

On appeal, however, the court said, “The natural meaning of the representations (made by the government) was that, while Metcalf would investigate conditions once the work began, it did not bear the risk of significant errors in the pre-contract assertions by the government about subsurface site conditions.”

The court added that the “preliminary information only” language signals that that information might change.

“It does not say that Metcalf bears the risk if the ‘preliminary’ information turns out to be inaccurate,” the court said.