A graphene-based spray coating that would help multiple industries "easily and inexpensively" fight corrosion is the focus of a new program at the University of Central Florida's NanoScience Center.

The center is building on the recent success of UCF spin-off Garmor Inc. in making a powder form of the wonder material graphene available to industry. In July, the university announced that Dr. Richard Blair and graduate student David Restrepo had developed a scalable mechanism to produce graphene products. 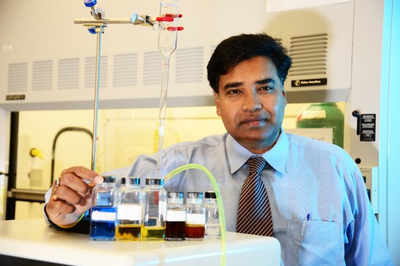 "Manufacturers can make tons at a time," Blair said at the time.

Interest and investment in graphene-based coatings has skyrocketed worldwide in the four years since the flake of carbon was the focus of Nobel Prize-winning research. Able to conduct electricity and heat, and unparalleled in thinness and strength, graphene is being studied to create a new generation of coatings that protect surfaces, resist UV degradation, fight corrosion, create ultra-water-resistant surfaces, resist fouling and even harvest energy.

Cambridge University is three years into a 10-year, $1.4 billion graphene research project supported by the EU.

"We can use graphene and composite materials to produce new ways for automotive, aerospace, oil and gas, the military and even the medical industries to take advantage of this extremely powerful material," said Sudipta Seal, director of the NanoScience Technology Center and Advanced Materials Processing Analysis Center and a professor of Materials Science and Engineering.

Seal has published articles on the strength and flexibility of aluminum composites reinforced with carbon nanotubes that is central to the process.

The goal of the UCF program is to provide a cost-effective, large-area polymer/graphene-based coating technology to both strengthen mechanical components such as materials used for the construction of aircraft and cars, and protect materials such as gas and oil pipelines from corrosion.

The research program will also focus on developing graphene oxide, a plastic host and a plasma spray.

The scientists will modify graphene, which originates from graphite similar that found in pencil lead, so that it can be sprayed onto a surface while retaining its innate strength and elasticity.

NanoScience Professor Lei Zhai will focus on developing a plastic material to host the graphene and ensure that it keeps its electrical and mechanical performance when embedded.

The composite development element is being led by Seal, who will configure the graphene agent for performance testing on steel, aluminum, and high-strength plastic. The coated substrates will be evaluated for their mechanical (abrasion and strength), as well as corrosion performance.