Engineers are working to secure the building and recover eight pricey Corvettes from the depths of a massive sinkhole that has opened beneath the National Corvette Museum in Bowling Green, KY. 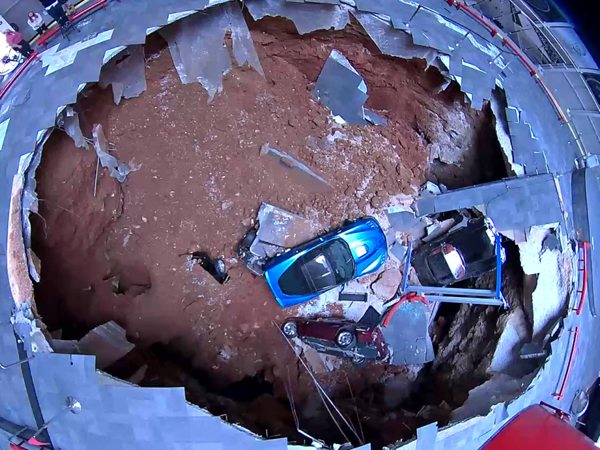 National Corvette Museum
A security camera captured the collapse, and a drone-mounted camera was later dispatched to survey the damage.

The incident, which occurred in the Sky Dome exhibit area of the Museum, was captured on a security camera. The footage shows the collapsing floor gobbling up the colorful classic cars, including the one millionth Corvette ever made.

Engineers have determined that the damage to the structure is repairable, the museum said. Drone helicopters, courtesy of Western Kentucky University, were sent into the Corvette-filled cavern to assess the situation.

In a release following the collapse, the museum listed the classic vehicles affected:

The first two cars were on loan from manufacturer General Motors; the museum owned the others.

Damage estimates are unofficial, but could total millions of dollars, reports said.

“The vehicles at the National Corvette Museum are some of the most significant in automotive history,” according to Mark Reuss, executive vice president of General Motors Global Product Development.

“There can only be one 1-millionth Corvette ever built,” he said.

Once the vehicles are unearthed, Chevrolet will oversee the restoration at its Mechanical Assembly facility, a specialty shop within GM Design, in Warren, MI, officials said.

The museum announced its “sinkhole game plan” Friday (Feb. 14) and has provided updates via Facebook notes.

The recovery plans include securing the sinkhole and surrounding areas, including the museum’s iconic red spire, so that any future sinkholes would not affect the facility. Sinkholes are said to be common in the area.

“It will take 2-3 weeks to stabilize and secure the area […] after which the process of vehicle recovery will begin,” according to the museum's statement. The recovery of the vehicles is expected to take four to six days.

Crews will add extra support to the building and remove a wall to make room for a crane that will be used to pull the cars out of the sinkhole, according to reports. Three of the cars near the top appear to be easily accessible, officials said.

Officials will also cut holes into the floor and fill them with concrete at key points for even more support, reports relate.

The National Corvette Museum is independently owned and is supported solely by charitable donations from enthusiasts. It is currently accepting donations on its website to assist in refurbishing the facility. The museum will celebrate its 20th anniversary in August.

Sinkholes caused issues in Florida last year, swallowing up a home and a resort.