Polymer, Heal Thyself—Over and Over

Self-healing material technology is not new, but scientists at the University of Illinois have moved the field a significant step forward.

Their new polyurea-based polymer, made of off-the-shelf materials, heals itself repeatedly at low temperatures with no catalyst, the researchers say.

What looks like tiny dogbone-shaped gummies now could be the beginning of peel-off coatings and self-healing plastics, according to materials science and engineering professor Jianjun Cheng, graduate student Hanze Ying, and postdoctoral researcher Yanfeng Zhang. 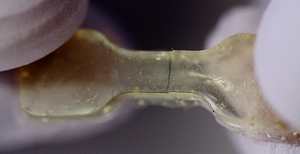 Photos, video: University of Illinois / Anne Lukeman
The plastic polymer was cut in two and allowed to heal overnight. Stretching the polymer did not break it.

Their paper, “Dynamic Urea Bond for the Design of Reversible and Self-Healing Polymers,” was recently published in the journal Nature Communications.

'Anybody Can Do This'

"We just buy commercial materials and mix them together, no fancy controls or special apparatus," said Cheng. "It's a very simple, low-cost, inexpensive process. Anybody can do this on any scale."

He adds: "The key advantage of using this material is that it's catalyst-free and low-temperature, and can be healed multiple times.

"These are very nice materials for internal cracks. This can heal the crack before it causes major problems by propagating."

Unlike other self-healing materials, the new product uses softer elastic materials made out of polyurea, one of the most common classes of polymers used in paints, coatings, elastics, plastics, and other consumer goods, the university reports.

The polymer is made with commercially available ingredients. By tweaking the structure of the polymer's molecules, the team "can make the bonds between the molecules longer so that they can more easily pull apart and stick back together—the key for healing," the university says.

When the polymer is cut or torn, the researchers press the two pieces back together and let the sample sit for about a day to heal. No chemicals or catalysts are required.

Furthermore, the team says, the materials can heal at room temperature, although curing at slightly higher temperatures (37 degrees Celsius, or about body temperature) does speed up the process. 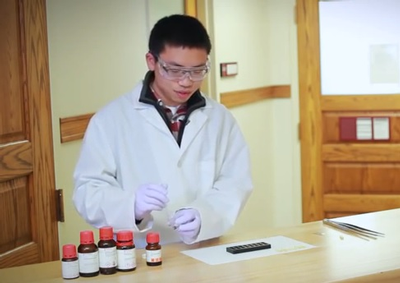 Graduate student Hanze Ying and colleagues at the University of Illinois developed the low-cost material, which requires no catalyst to self-heal.

The team says the mended polymer bonds "nearly as strongly as before it was cut."

In fact, the team adds, some healed samples tore in a new place when stretched, while the repaired area held.

The researchers hope manufacturers can easily integrate the dynamic materials and are exploring how the polyurea could perform in different applications.

One possibility, they say, is a removable polyurethane coating or paint.

“In some areas, when it’s not necessary for the coating to be permanent and you want it to be removable, this chemistry may be applied to existing coating materials to make it reversible,” Cheng said.

“In general, polyurea and polyurethane are widely used. This chemistry could modify existing materials to make them more dynamic, healable.”