The loss of a U.S. nuclear submarine torched by a painter has yielded a new fire prevention manual by the U.S. Navy.

The Naval Sea Systems Command's (NAVSEA) new fire safety and prevention manual for all ship repair and construction activities integrates "lessons learned from the major fire that occurred on board USS Miami (SSN 755) at Portsmouth Naval Shipyard in 2012," the Navy announced Feb. 11. 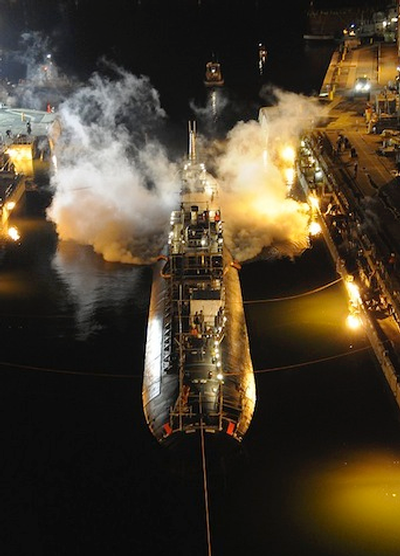 Civilian painter-blaster Casey James Fury is serving 17 years in prison after pleading guilty to two counts of arson related to the fire, which injured seven people.

The Miami had 10 years of service life, including five deployments, remaining when Fury—reportedly upset over his girlfriend and wanting to get out of work—set a fire aboard the sub while it was drydocked for maintenance at Portsmouth Naval Shipyard in Kittery, ME.

Fury sandwiched alcohol wipes between two pieces of wood and ignited the wipes with a lighter, authorities said. More than 100 firefighters worked 12 hours to bring the resulting blaze under control.

The damage was initially estimated at $450 million. NAVSEA planned to repair the sub, but decided later to scrap it after a $71 million assessment and initial cleanup determined that repairs would cost closer to $700 million.

It was the first sub and nuclear-powered ship to be lost in a U.S. naval shipyard.

Just days after Fury was sentenced, fire crews responded to another, unrelated blaze on the Miami, caused by abrasive blasting. A shipyard spokesperson said that the sandblasting operations in the control area of the sub's forward compartment had produced some sand grit that damaged a temporary light fixture, igniting a fire.

The new manual details policy on hot work during an industrial availability, handling of flammable and combustible materials, and fire prevention and safety inspections. The manual also requires the installation of a temporary automatic fire detection system during submarine availabilities.

In addition, every ship repair and construction activity will be required to perform an annual fire drill "to test its full fire response plan and emergency response capability," the Navy said. These drills will provide a forum for each activity to prove that its local plan is effective.

"This manual is the right long-term response to the watershed event the Miami fire represents," said Hilarides. "It is imperative that all organizations implement the applicable requirements of this manual and ensure their fire safety and response procedures and capabilities are solid."

While the manual "covers all ship availabilities," it provides "tiered risk mitigations based on the amount and complexity of the work being performed." It also grants commands the flexibility "to address unique and challenging situations."

"Organizations are expected to be judicious and make smart decisions to achieve an optimum balance of all the risks—fire safety, as well as cost and schedule."

NAVSEA, the largest of the Navy's systems commands, is comprised of more than 58,000 civilian and military personnel in 36 activities worldwide. NAVSEA is responsible for developing, delivering and maintaining the Navy's ships and systems.