NSRP is a collaboration of U.S. shipyards working to reduce the cost of maintaining and operating U.S. Navy ships. 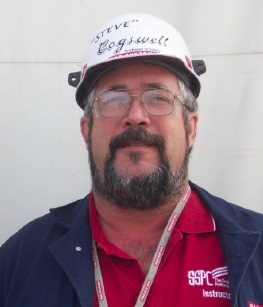 Robust Functional Paperless Paint for U.S. Navy 009-32 Documentation with TruQC
Stephen Cogswell discussed three recent projects that were developed to save time and money in ship building and maintenance.

Presenter Stephen Cogswell, of BAE Systems Southeast Shipyards, gave an update on current and recently completed work by the NSRP Surface Preparation and Coating (SPC) Panel, highlighting three projects that were designed to discover and implement cost-saving processes and technologies over the life of a vessel.

SPC sponsors up to three projects each year. The projects must have high value, high impact, and be able to be implemented on deck plates.

The panel proposed that using this software would reduce the cost of documentation in shipbuilding and repair by reducing the hours spent documenting inspections and correcting errors.

“It will keep the inspectors on the deck plates measuring and monitoring the quality product, instead of at their desk shuffling paper,” Cogswell said.

TruQC modified its current software to support the specific needs of the contractors and government inspectors. The program had to be evaluated and tested to these requirements, and to meet the paperless QA reporting requirements of the Naval Sea Systems Command (NAVSEA) Standard Items.

Compatibility of 'Single Coat' Tank Coatings with Retained Pre-Construction Primer: The goal of this project with Elzly Technology Corp. was to get approval from NAVSEA and coating manufacturers to apply rapid-cure, single-coat tank linings over pre-construction primer.

“They decided we were spending way too much money making a tank internal pretty,” Cogswell explained.

For the first part of this project, test tanks and panels were prepared, and testing showed that the coating system should be acceptable.

However, the data were not as good as required by the current, near white metal surface preparation standard. So a follow-up project was funded, to extend the tank exposure testing to one year and to apply the single-coat tank lining on a Navy ship under construction.

NAVSEA approval was obtained in 2013, and a multi-tank application is currently in progress.

The goal was to observe coating practices to see what lessons could be implemented at NSRP shipyards. Among the questions addressed:

So what did the team learn?

The review was Cogswell’s last. He announced that Arcino Quiero Jr., of Newport News Shipbuilding, would take over as chair of the SPC panel; Pete Lockwood, of Bath Iron Works, will serve as vice chair.

SPC panel meetings, held three times a year, are open to the public, and Cogswell invited attendees to present any ideas they might have.

“We look forward to you joining us and contributing to our cost-reducing mission,” Cogswell said.