Nagin was found guilty of accepting hundreds of thousands of dollars in bribes and other gifts before and after Hurricane Katrina ravaged the city in August 2005, while he was mayor.

Nagin, 57, was convicted Wednesday (Feb. 12) of 20 out of 21 criminal charges, including bribery, honest service wire fraud, money laundering, conspiracy, and filing false tax returns, according to prosecutors and various reports on the case. 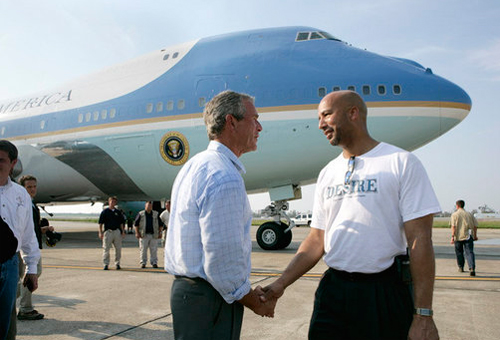 White House Photo
C. Ray Nagin, shown here with President George W. Bush, was in the national spotlight in the wake of Hurricane Katrina in 2005. The former mayor has been found guilty of bribery and other charges.

Nagin was acquitted on one count of bribery by the jury.

The former chief executive has been ordered to remain in his home in Frisco, TX, subject to electronic monitoring until his sentencing, scheduled for June 11—his birthday. The charges carry a variety of maximum sentences, including three to 20 years in prison and fines from $100,000 to $250,000 on each count, according to prosecutors.

Nagin was charged in January 2013 for his role in a scheme to defraud the City of New Orleans through bribery and kickbacks, prosecutors said. The Democrat was first elected mayor in 2002. He served eight years, until 2010.

Beginning in December 2004, Nagin used his public office and official capacity to provide favorable treatment, including awarding contracts that benefited business and financial interests of individuals providing him with bribes and kickbacks, prosecutors said.

Reports said in exchange, Fradella had received more than $4 million in city contracts for repair work at the Louis Armstrong New Orleans International Airport and in the French Quarter after Katrina.

The indictment charged Nagin with accepting numerous bribes and payoffs from consultants and contractors, money laundering conspiracy, and filing false tax returns for the years 2005 to 2008.

The former mayor denied the charges against him during his corruption trial that began Jan. 27.

He testified that “key witnesses had lied and prosecutors had misinterpreted evidence including emails, checks and pages from his appointment calendar linking him to businessmen who said they bribed him,” according to the Associated Press’ coverage of the trial.

Following the jury’s verdict, Nagin was reportedly overheard saying “I maintain my innocence.”

His defense attorney, Robert Jenkins, said an appeal would be filed after sentencing and previously told reporters that the prosecution had overstated Nagin’s authority regarding city contracts and that there wasn’t any proof that money and inventory given to Nagin’s granite business was tied to the city.