ORLANDO—It will take more than protective coatings to make a dent in the U.S. military's $23 billion-a-year campaign against corrosion.

It will take an entirely new national attitude—one trained to "prevent, treat and control" corrosion rather than "wait, find and fix" it.

So says the Defense Department's Office of Corrosion Policy and Oversight, which contends that the real cause of corrosion is not oxidation—but indifference and lack of awareness. 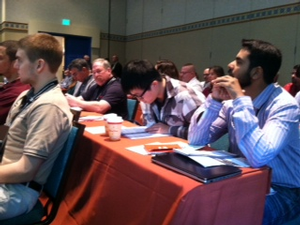 That was the premise of "Changing the Corrosion Culture through Education and Training," a presentation Tuesday (Feb. 11) at SSPC 2014 by Daniel J. Dunmire, Director of Corrosion Policy and Oversight.

Who needs culture change, according to Dunmire? Just about everybody:  designers and engineers, policy makers and the public, trainers and standards writers, suppliers and academia, procurers and project managers.

Each of those parties is a piece of the overall corrosion puzzle. And Dunmire says his office is working on many fronts to show each party what his/her role is—and what's at stake when corrosion spreads and materials degrade.

The toll is not just economic, although corrosion does consume a full 25 percent of DOD's annual maintenance budget. The greater toll, says Dunmire, is corrosion's impact on military readiness.

"We have a sacred focus," he told the session. "We’re there for one reason and one reason only: to support the warrior in our area of responsibility."

Correcting these mistaken beliefs is now the job of seven working integrated product teams (WIPTs), staffed by volunteers from every service branch. Those WIPTs ("whippets") are engaged in:

Other teams in the effort include the University of Akron, the first university in the western hemisphere to offer a bachelor's degree in corrosion engineering. That curriculum is a Corrosion Office-supported initiative that Dunmire called "perhaps the crowning achievement to date in changing the corrosion culture."

Communications involves reaching and educating as many corrosion stakeholders in as many ways as possible, Dunmire said, including:

The seventh WIPT is the Corrosion Office-led Technical Corrosion Collaboration (TCC), a nationwide partnership by universities, academies and research laboratories engaged in corrosion-related research and development.

"We need more training and education for every individual associated with corrosion prevention and control," said Dunmire. "We want to develop a constituency that leverages positive change."

One other group that sorely needs a new mindset, Dunmire noted: all of those who are profiting handsomely from the Pentagon's corrosion problems, rather than joining the search for better solutions.

“Don’t make the Department of Defense a profit center," Dunmire told his audience. "Charge us a fair price, and give us something that lasts.”

He added: "We're not saying the sky is falling. We're saying you can do something about this."