As always, the society kicked off its four-day annual conference with its two-hour annual meeting and awards luncheon. SSPC President Ben Fultz and Executive Director Bill Shoup gave an upbeat assessment about the society's current numbers and reach before presenting the annual Structure Awards and individual awards. 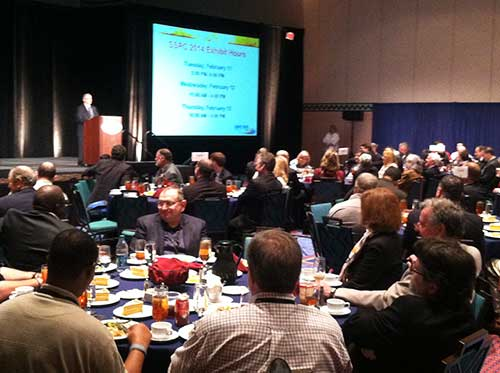 Technology Publishing Co.
SSPC Executive Director Bill Shoup told the annual meeting that individual membership topped 10,000 for the first time in 2013. The society is also running with a $1.275 million surplus.

"We've had a great year," Shoup told a crowd of several hundred.

For the first time, individual membership in SSPC topped 10,000 and organizational memberships topped 900 by Dec. 31, 2013, he reported.

The society ended the year with a $1.275 million surplus, increasing revenues by about $500,000 in the last year, Shoup said.

The Structure Award winners, listed below, will also be featured in a photo essay in an upcoming issue of JPCL.

The bridge, built in the early 1970s and not repainted since then, was due for important construction improvements, including a seismic retrofit and repainting.

The project, which cost more than $74 million, required an SSPC-QP 1- and QP 2-certified contractor to remove and dispose of 194,000 pounds of original lead-based paint that had covered the bridge's one-million-square-foot surface.

That same surface area was abrasive blast-cleaned to a Near-White (SSPC-SP 10) finish before a three-coat system (organic zinc, epoxy and urethane) was applied.

The project started in February 2011 and was completed in January 2014.

For this project, a new water tank and its associated facilities had to be constructed in the South Hill area of Puyallup, WA. The 105-foot-tall, field-welded steel standpipe (AWWA D100) tank measures 70 feet in diameter.

Shop coating for the new tank consisted of a polyamidoamine epoxy applied to prepared steel. Polyamide epoxy primer and intermediate coats were applied in the field.

Mural artists worked from a single hydraulic lift to paint Douglas fir trees reaching 100 feet tall. They also painted  a variety of other native plants that resemble the trees and natural undergrowth surrounding the tank site.

Forgoing templates, stencils or even a grid to guide the mural's layout, the artists used six-inch rollers to apply the acrylic polymer coatings freehand.

The project lasted from April to August 2012.

Named for the late founder and president of Tank Industry Consultants, this award reflects coatings work that demonstrates innovation, durability or utility.

The jackets' legs were fabricated at the Smulders Project Plant, where they were assembled into a jacket foundation and finished by adding resting platforms and boat landings. After the midsections were painted and metallized, they were connected to the jacket foundations and received a complete touch-up.

The building of all the structural parts for the jackets was executed at several different locations, and then the separate structures were transported to Belgium, where they were assembled and shipped out to Thornton Bank.

By the end of the two-year project, which was completed in the third quarter of 2012, six different coating systems for a total of 152,000 liters of paint had been used.

This award honors an outstanding industrial or commercial coatings project that demonstrates the longevity of the original coating.

The structure may have had spot repairs or overcoating with the original coating still intact.

Coating a copper roof in southern Florida can present an array of challenges, such as extremely hot surface temperatures, daily rain storms and salty ocean air.

Adding to those challenges, this particular roof was seamed, sloped and multi-tiered, which can cause issues with the coating's wettability and edge retention.

The surface was high-pressure washed and prepared according to SSPC-SP 2, Hand Tool Cleaning. The coating system included a prime coat with a polyamide epoxy designed for forgiving application and adhesion characteristics, and a high-solids fluoropolymer with a semi-gloss finish that provides color and gloss retention in severe exposure environments.

The project was completed in 2006, and the roof continues to shine in the hot Florida sun and withstand the salty air.

This year's two winners are the USS Ronald Reagan (CVN 76) and the USS Freedom.

With a seven-month timeframe and an aggressive undocking schedule, preserving the coating system on the USS Ronald Reagan at the Puget Sound Naval Shipyard required a lot of coordination.

To prepare that much steel for coatings work, 48 blasting nozzles were in operation and eight 22-ton steel abrasive recycling units were mobilized and used at the same time, with some of the 50-foot units raised and placed on the carrier's flight deck.

The project, completed in January 2013, was the largest "preservation availability" ever at the shipyard.

Commissioned in 2008, the USS Freedom went to dry dock in Janary 2013  to remove its existing failed coating system. It became the first warship since the 1960s to sport the U.S. Navy Federal Standard colors for camouflage: black, haze gray, light gray and ocean gray.

One coat of edge-retention epoxy was applied from the water line to the rail, and the four camouflage colors were a semi-gloss epoxy-polysiloxane.

Because the USS Freedom is an active warship, the contractor and coating supplier had to meet accelerated deadlines. In only 72 hours, the coatings were manufactured in Arkansas and shipped to National City, CA. Priming and painting began immediately, and the ship was returned to service in less than six weeks.

The ship is one of the first new ships painted with a low solar-absorbing polysiloxane. Shiifting Colors, a project video, showed the work. 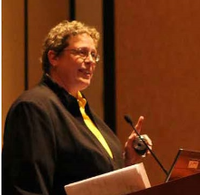 The society also presented a special Executive Director's Award to Karen A. Kapsanis, the longtime editor of JPCL. Kapsanis stepped down from the position Dec. 31.

Shoup noted that the award was not presented annually, but that he wanted to honor Kapsanis's decades of service to the journal, the voice of SSPC.

"Karen made a difference because every month, she put out an outstanding magazine," said Shoup. "Every issue was excellent. Every one.

"Karen put her heart and soul into that magazine for over 25 years."

Other awards and recipients were:

Show information will be updated continually on PaintSquare's Guide to SSPC 2014. A news ticker on the page will keep participants updated on show and industry happenings throughout the week.