More than a thousand Los Angeles schools, homes, commercial properties and their occupants may be at risk if a major temblor rocks the area, according to a newly released list by the University of California.

Many of the buildings are in older commercial districts of the city, such as downtown and Hollywood.

Compiled by UC Berkeley engineering scientists over several years, the list identifies the addresses of 1,451 concrete structures built before 1976. At least 75 of the buildings would be completely destroyed, the scientists estimate. 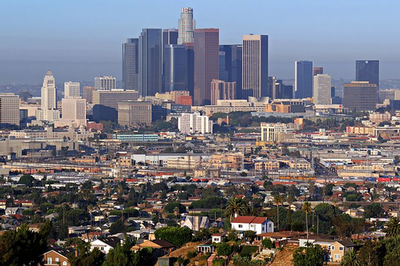 Basil D Soufi / Wikimedia Commons / CC SA 2.0
A newly released list identifies hundreds of older Los Angeles buildings that could be vulnerable to collapse in an earthquake, but further examination is underway.

However, scientists warn against undue public alarm, saying the list may be partly outdated.

Los Angeles city officials obtained the list Jan. 21 and are reviewing it for verification, according to a report in the Los Angeles Times. A copy of the database was also provided to the Times.

The city reportedly requested the scientists’ list after a Times analysis in October warned of potential L.A. building collapses.

Not all of the buildings listed pose the threat of failing completely in a major earthquake, the scientists told reporters.

"I have a concern and the researchers on my team that people could become unduly alarmed and take a course of action that is really not warranted by this database,” Jack Moehle, Ph.D, an engineering professor at UC Berkeley, told a local NBC affiliate.

Some of the structures may have already been retrofitted, aren’t completely constructed of concrete, or are otherwise safe, Moehle said.

The scientists say that the list is further not “100 percent accurate” and that “they have not reached any conclusions about the safety or hazard posed by any of any of the buildings,” according to the Times.

Concrete buildings have been found to be “particularly vulnerable” amid earthquakes due to their brittle frames, the outlet reported, citing experts.

Individual inspections and examinations are needed to further assess the structures’ threats. The L.A. City Council supports pursing funds to perform such evaluations, but a plan has not yet been developed.

Citing experts, the Times reports that the cost for a preliminary examination could range from $4,000 to $20,000 depending on the building’s size.

The maximum potential occupancy of those buildings is nearly half a million people, NBC said.

Using the Times’ interactive map, NBC Los Angeles named a number of buildings, including some campus buildings at the University of Southern California; the Capital Records Tower; CBS Studios; and the Children’s Hospital Los Angeles.

Seismologists have voiced concern that time is running out to fix the aging building stock, the Times reported in October.

“If the Big One hits the San Andreas fault—and scientists say it's long overdue—seismic waves would cascade into downtown Los Angeles at a magnitude not felt since 1857,” the article said.

Portions of the fault line are capable of a magnitude 8.1 earthquake, reports relate.

“Another alarming scenario is a huge temblor striking directly underneath Hollywood or the Westside," according to the Times. "More than 300 faults crisscross the L.A. Basin.”