Tomorrow’s Navy housing may soon be popping out of a printer near you.

The Office of Naval Research is partnering with the National Science Foundation to invest in a company that aims to scale up current 3D printing technology in order to produce entire buildings "printed" out of concrete.

The layered fabrication technology could produce a 2,500-square-foot building in a single day, says Dr. Behrokh Khoshnevis, who founded the company, Contour Crafting. 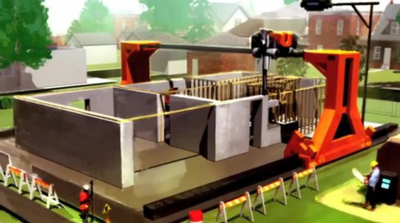 Khoshnevis is director of the Manufacturing Engineering Graduate Program at the University of Southern California.

For the Navy (and, presumably, other service branches) 3D printing technology could provide an unprecedentedly nimble way to establish permanent structures for troops deploying to any corner of the globe where a C-17 can bring in a printer and materials, reports defensetech.org and other media outlets.

In fact, the technology is not that great a leap, contends Khoshnevis. On the contrary, he says, it is traditional construction—dangerous, slow, labor intensive, costly and (he says) corrupt—that is the throwback, and no longer sustainable.

"If you look around yourself, pretty much everything is made automatically today—your shoes, your clothes, your home appliances, your car," Khoshnevis explains in a 2012 TED Talk. "The only thing we still build by hand are these buildings."

3D printing of structures, he says, takes its inspiration from Computer Aided Design/Computer Aided Manufacturing (CAD/CAM) in manufacturing. (Khoshnevis is an expert in CAD/CAM, robotics and mechatronics-related research.)

With CAD/CAM, items are designed on one computer and the information is sent directly to the production machinery, which then builds the product "without any human interference," Khoshnevis says.

Automated construction of large structures, Khoshnevis says, is just a matter of scaling up those processes, with an oversized printer using programmed schematics to lay down a building layer by layer.

Khoshnevis says he is now using machines that can "print out" a concrete wall able to bear a compressive stress of 10,000 pounds per inch.

Nor is the end result of the process a battalion of identical tract houses, Khoshnevis says. To the contrary: The computer-aided design makes it relatively simple to customize and adjust structures.

"Using this process, a single house or a colony of houses, each with possibly a different design, may be automatically constructed in a single run, embedded in each house all the conduits for electrical, plumbing and air-conditioning," Contour Crafting says on its website. 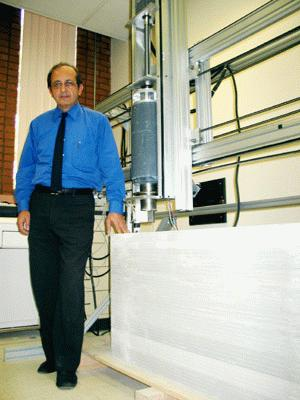 isi.edu
In 2004, Behrokh Khoshnevis showed a working Contour Crafting printer and a wall the machine built. He says a 2,500-square-foot structure could be built in a day.

Other potential future applications for the technology are emergency housing, low-income housing, and even habitats on other planets, the company says.

The Navy has been experimenting with 3D printing for several months, setting up printers in Norfolk, VA, and San Diego to produce clips, brackets, gas caps and other small plastic parts and gadgets for crews to use.

Kohlmann recalled one case where a crew member on a forward-deployed minesweeper ordered a $7 gas cap through the Navy's parts system. The part "took weeks and hundreds of dollars to be shipped," Navy Times reported.

In such cases, 3D printing technology could have enormous potential implications for saving money and time and increasing military readiness, said Kohlmann.

“If half the things fail and don’t work, that’s fine,” he said. “We’re trying to find the realm of the possible with sailor ideas.

"So we want those crazy ideas that may or may not work.”