Government scientists have developed a nanocoating that dramatically cuts the flammability, melting and pooling of polyurethane foam—the source of hundreds of deaths and thousands of house fires each year.

The advance, from the National Institute of Standards and Technology (NIST), could mean major strides against house fires that start in upholstered furniture. Those account for about 6,700 home fires and 480 civilian deaths annually, according to the National Fire Protection Association.

In 2011, NIST found that homes were burning faster than ever, due largely to the furnishings within.

“Using an approach akin to assembling a club sandwich at the nanoscale … researchers have succeeded in crafting a uniform, multi-walled carbon-nanotube-based coating that greatly reduces the flammability of foam commonly used in upholstered furniture and other soft furnishings,” NIST announced Jan. 14. 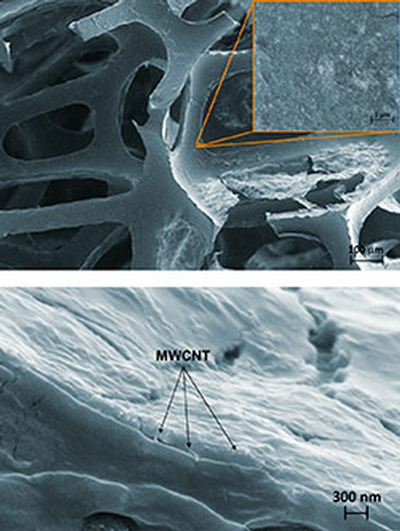 Kim / NIST
An easy-to-apply coating significantly reduces the flammability of foam used in furniture, according to NIST. The thin coating is deposited onto the surface of all the nooks and crannies of the porous foam (top), with heat-dissipating multiwalled carbon nanotubes (MWCNT) uniformly distributed throughout (bottom). (Color added for clarity.)

The team says nanotube-coated polyurethane foam reduces flammability by 35 percent when compared to untreated foam. The coating also prevents melting and pooling of the foam, which generate additional flames that are a major player in the spread of fires, NIST says.

NIST’s technique “squeezes nanotubes between two everyday polymers and stacks four of these trilayers on top of each other."

“The result is a plastic-like coating that is thinner than one-hundredth the diameter of human hair and has flame-inhibiting nanotubes distributed evenly throughout,” according to NIST.

Kim and Davis say the technique can be used with a variety of types of nanoparticles to improve the quality of surface coatings for a range of applications.

The researchers say they experimented with “a variety of layer-by-layer coating methods before arriving at their triple-decker approach.”

However, the earlier methods failed to meet three key objectives: “entire coverage of the foam's porous surface, uniform distribution of the nanotubes, and the practicality of the method.”

The team ended up borrowing a technique often used in cell culture to make DNA molecules stickier to doctor the nanotubes themselves. The method attached nitrogen-containing molecules—called amine groups—to the nanotube exteriors.

“This step proved critical: The doctored nanotubes were uniformly distributed and clung tenaciously to the polymer layers above and below,” according to the scientists. “As a result, the coating fully exploits the nanotubes' rapid heat-dissipating capability.”

The technology offers much greater resistance to ignition and burning than achieved with the brominated flame retardants commonly used to treat soft furnishings today, according to NIST.

Further, Davis notes that a "protective char layer" forms when the nanotube-coated foam is exposed to extreme heat, creating a barrier that prevents the formation of melt pools.

"This kind of technology has the potential to reduce the fire threat associated with burning soft furniture in homes by about a third," Davis says.