Williams Olefins' Geismar, LA, plant exploded June 13, 2013. Six months later, the Occupational Safety and Health Administration announced that it was citing the company for six process safety management standard violations, one willful and five serious, for a total of $99,000 in proposed penalties. 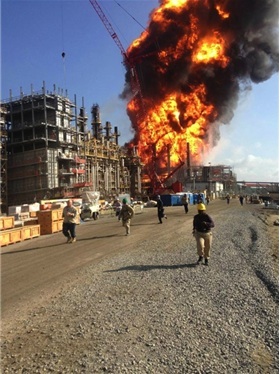 Process safety management encompasses a detailed set of requirements and procedures for employers to follow to address hazards associated with processes and equipment that use large amounts of hazardous chemicals, OSHA said. In this case, that chemical was propylene.

Williams Olefins is a subsidiary of Williams Partners LP, headquartered in Tulsa, OK. The company has about 4,700 employees corporatewide, according to OSHA.

The Geismar, LA, plant specializes in the production of natural gas, ethylene and propylene and employs about 127 workers.

Zachary Green, 29, died in the explosion. He was an operator who started working with the company in October 2012. The second victim, 47-year-old Scott Thrower, died at the hospital the next day.

"It is the employer's responsibility to find and fix workplace safety violations and to ensure the safety of its workers. Failing to do so cost two workers their lives."

The U.S. Chemical Safety Board is still investigating. CSB Chairperson Rafael Moure-Eraso met with the U.S. Senate Committee on Environment and Public Works on June 27, 2013, telling them that "there was a catastrophic failure involving a heat exchanger and associated piping which broke loose from a distillation tower."

Williams Olefins confirmed in December that it had received the citations and was carefully reviewing OSHA's analysis and findings.

"Williams cooperated in a full and transparent manner to support OSHA's investigation, and we are in the process of reviewing the analysis," said John Dearborn, senior VP of NGL and Petchem Services.

The willful violation, OSHA's highest level of infraction, was cited for failing to develop clear, written procedures for how to change and put idle pressure vessels into service. That violation carries a $70,000 proposed penalty. A willful violation is one OSHA says is committed with intentional, knowing or voluntary disregard for the law's requirements, or with plain indifference to worker safety and health.

According to OSHA, serious violations occur when there is substantial probability that death or serious physical harm could result from a hazard the employer knew or should have known about.