Architect, Contractor Rhyme it Out

Can a good rap save a geeky rep ... or even settle scores on the project team?

YKK AP, an architectural products company, hopes that its latest (yes, latest) rap video at least strikes a chord with the building community.

That’s right, the company’s “I am an Architect: Part Two” video demonstrates the power struggle of contractors and architects through a “rap battle” fought with rhythm and rhyme.

“You made a good bid, I couldn’t decline,” the architect sings.

“But let me teach you how to dress and respect design.”

The contractor fires back with, a “Listen here pretty boy….”

“Without me, all you’d have are specs and plans,

“Watch me make things happen while I work on my tan.” 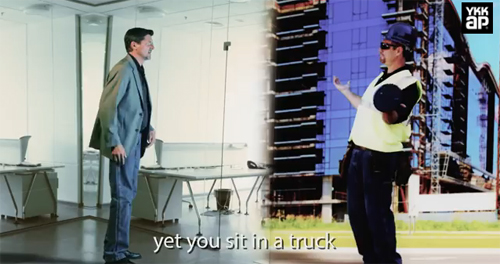 With just over 73,000 views on YouTube, the video shows a lighter side to the building industry.

YKK AP, an Atlanta, GA-based maker of storefronts, window wall and curtain wall systems, encourages viewers to vote on the winner of the “rap battle” on its Facebook Page.

As of Wednesday (Jan. 22), the architect was the clear leader, with 112 votes compared to the contractor’s 26.

But What About Part I?

The company’s original “I am an Architect” video put it on the viral map, with 440,968 views on YouTube.

We’ll leave you with the chorus:

Re-designing the world, from buildings to chairs.

It’s a daily grind, but we love what we do,

A satisfying job, giving you a better view.”