Highway Fund to Drain Before Your Eyes

The federal Highway Trust Fund will start bouncing checks in August, and taxpayers will have a front-row seat to watch the agency go broke.

The Department of Transportation has started posting exactly how much money the Highway Trust Fund has left and will update that number every month until the fund either runs out or sustains itself, Secretary of Transportation Anthony Foxx has announced. 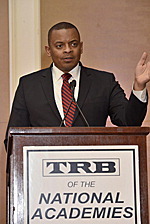 National-Academies.org
"As many as 100,000 bridges are old enough for Medicare," DOT Secretary Anthony Foxx said at the TRB's 93rd Annual Meeting.

At the heart of the funding shortfall is the $105 billion, 27-month MAP-21 transportation bill, which is set to expire Oct. 1.

The source of funding for most programs in MAP-21, the Highway Trust Fund is comprised of the Highway Account (funding for highway and intermodal programs) and the Mass Transit Account.

The Highway Account started FY 2014 with about $1.6 billion in cash and, shortly after the fiscal year started, received a $9.7 billion transfer from the General Fund. (The amount, under MAP-21, was supposed to be $10.4 billion but was reduced by sequestration.) As of the end of December 2013, the account's cash balance was $8.5 billion.

The Mass Transit Account began FY 2014 with about $2.5 billion, and received a $2 billion transfer from the General Fund (down from $2.2 billion authorized in MAP-21). As of the last week of December 2013, that account had a balance of $3.8 billion.

Budget vs. Infrastructure: 'Time is Money'

As the budget dwindles, Foxx also has another kind of deficit on his mind—the infrastructure deficit.

"A third of all major U.S. roads are in 'poor or mediocre condition,'" Foxx noted. "We face more than $86 billion in backlogged transit maintenance. As many as 100,000 bridges are old enough for Medicare."

Citing a decade of information from the World Economic Forum, Foxx said the country's quality of infrastructure has fallen 20 spots, putting the U.S. behind Barbados—"a country with one airport," Foxx noted.

Part of the problem is that funding has been addressed only in short-term increments, which is too unpredictable for state and local governments to want to make long-term investments and plans, Foxx said.

"So they've waited," said Foxx. And as they've waited to repair roads, and bridges, and transit projects, the price tag on those projects has gotten bigger. Because what's true in business is true for infrastructure: Time is money."

Foxx said he planned to work with Congress, to show that it would be fiscally responsible to fund infrastructure now, including passing a surface reauthorization bill and a bill to fund rail.

"[W]hen we talk about our long-term infrastructure deficit, let's understand that every day we fail to tackle it, we're actually creating more expensive projects," he said.

"But what if we could make one plus one equal three—or four?"

Foxx says that's the kind of math the DOT is employing with its Every Day Counts program, an initiative designed to identify and deploy innovation aimed at reducing the time it takes to deliver highway projects, enhance safety, and protect the environment.

Asphalt on the Brain

The secretary also has another solution up his sleeve: warm mix asphalt.

According to Foxx, warm-mix asphalt can save the country $3.6 billion by 2020 because the material doesn't need to be heated as hot to pave roads. The DOT says that warm-mix asphalt can reduce paving costs; extend the paving season; improve asphalt compaction; allow asphalt mix to be hauled longer distances; and reduce exposure to fuel emissions, fumes and odors.

The bill gives $17.65 billion in discretionary funding to the DOT, and $53.5 billion in obligation limitation (contract authority provided through transportation authorization bills).

Several Democrats from the Ways and Means Committee have called on the committee's Chairman, Rep. Dave Camp, to start exploring new funding options for the Federal Highway.

In a Jan. 16 letter to Camp, the Democratic members wrote, "Our transportation programs will begin to notice a drop in funding this summer, when the Highway Trust Fund's available cash on hand is likely to fall below $4 billion, which is the minimum amount necessary to maintain a sufficient balance to meet week-to-week obligations.

"Below this amount, reimbursements to states will be delayed, construction projects will be curtailed, and jobs will be lost throughout the economy.

"We have fewer than nine months to find a funding solutions for our infrastructure system. Thus, time is of the essence."