Now the world's largest paint and coatings company, the Pittsburgh-based multinational turned in record fourth-quarter net sales that bested the year-ago quarter by 14 percent and a share price that crushed the 2012 figure. 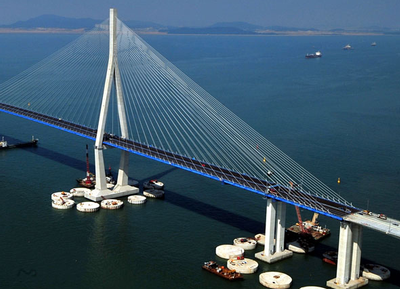 “Our record fourth-quarter financial performance caps off one of the most successful years in the company’s history, both financially and strategically,” PPG chairman and CEO Charles E. Bunch reported in releasing the fourth-quarter and year-end results Thursday (Jan. 16).

The company also announced a quarterly dividend of 61 cents per share.

With a 45 percent increase in earnings per share versus last year, PPG has "now delivered 14 consecutive quarters of record adjusted earnings," Bunch said.

The black ink was built on "our continuing operating and cost discipline," coupled with "a higher level of organic sales growth,” Bunch said.

For the full year of 2013, the company reported:

“We delivered all-time record full-year earnings, more than replacing the earnings from the separated commodity chemicals business," said Bunch, due to "aggressive management"  and "earnings accretion from cash deployed."

PPG bought back $1.0 billion in stock in 2013 and ended the year with cash and short-term investments totaling $1.75 billion.

Performance Coatings net sales for the quarter were up 25 percent, to $1.4 billion. The huge division comprises Protective and Marine's six brands, the Aerospace portfolio, the 24 brands of Architectural Coatings (Americas and Asia/Pacific), and more than 20 brands in the Automotive Refinish business.

PPG said the Performance Coatings increase was due primarily to acquired-business sales, partly offset by a 3 percent decline in segment volumes. Sales grew in both Aerospace and Automotive Refinish. Segment volumes continued to take a hit from lower marine new-build activity, but PPG said that decline was stabilizing.

Bunch said the company "remained slightly ahead of schedule" on achieving its cost synergy goals related to the Akzo Nobel acquisition.

The good news did not extend to Architectural Coatings-EMEA (Europe, Middle East and Africa), where fourth-quarter sales volumes of residential and commerical paints slipped by 4 percent.

Still, PPG took a glass-half-full approach, noting that the first half of 2013 saw declines averaging 10 percent. Despite the sales dip, cost cutting and restructuring squeezed out segment earnings of $22 million, $13 million higher than 2012, according to PPG.

higher earnings stemming from our continuing operating and cost discipline are now being coupled with a higher level of organic sales growth,” Bunch said. - See more at: http://www.ppg.com/en/newsroom/news/Pages/20140116A.aspx#sthash.5HF9JJlY.dpuf

higher earnings stemming from our continuing operating and cost discipline are now being coupled with a higher level of organic sales growth,” Bunch said. - See more at: http://www.ppg.com/en/newsroom/news/Pages/20140116A.aspx#sthash.5HF9JJlY.dpuf

PPG is forecasting savings of $75 million to $90 million in its "acquisition-related cost synergies" in the North American business in 2014.

Global growth is expected to be modest, Bunch said, led by broad growth in several coatings markets in the United States.

"Emerging-regions growth, while still uneven, is expected to continue at a solid pace for PPG, comparable to recent trends," Bunch said. "In Europe, which represents about one-third of our sales, economies appear to be improving but remain fragile."

Restructuring, however, should yield "measured growth" in that region, he added.

PPG offers detailed commentary regarding its financial performance, including presentation-slide content, at the PPG Investor Center. The company's conference call on its fourth-quarter and full-year performance are also available there through Jan. 30.

“Our record fourth quarter financial performance caps off one of the most successful years in the company’s history, both financially and strategically,” said Charles E. Bunch, PPG chairman and chief executive officer. “With the 45 percent increase in earnings per share versus last year, we have now delivered 14 consecutive quarters of record adjusted earnings, illustrating the benefits of our strong coatings portfolio, broad global footprint, prudent cash deployment and measurable results from our strategic actions. - See more at: http://www.ppg.com/en/newsroom/news/Pages/20140116A.aspx#sthash.5HF9JJlY.dpuf
Tweet