Gov. Chris Christie, widely regarded as a 2016 presidential hopeful, maintained his innocence in the events but apologized for them anyway during a two-hour-long press conference.

The bridge connects Manhattan and Fort Lee. The lanes were closed from Sept. 9 to 13 for what was then believed to be a traffic study.

The closures forced traffic backups that stretched into neighboring towns, caused delays in ambulance and rescue services, and gridlocked buses full of children trying to get to school. 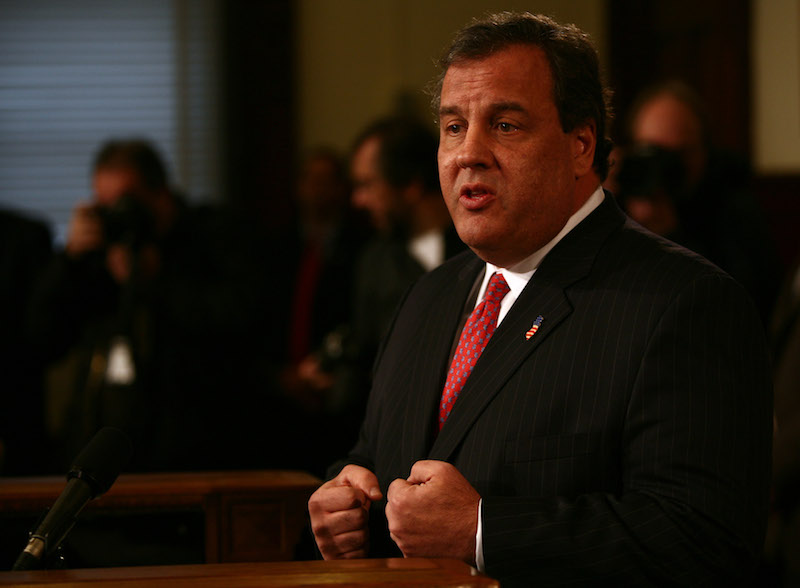 Christie said this week that the evidence of his staff's wrongdoing had left him "stunned," "humiliated," "sad," and "heartbroken."

The emails and texts were sent between private accounts of Bridget Anne Kelly, Christie's deputy chief of staff, and David Wildstein, director of interstate capital projects for the Port Authority of New York and New Jersey. Wildstein is also a childhood friend of Christie.

Christie has adamantly denied any prior knowledge about the information in the emails, repeatedly stating that he first heard about it “when I was done with my workout yesterday morning and got a call from my communications director.”

Baroni and Wildstein both resigned from their positions on Dec. 13.

While Christie was apologizing Thursday, Wildstein was invoking his Fifth Amendment rights, declining to answer questions from a state Assembly committee investigating his role in the incident.

At the press conference, Christie said he terminated Kelly “immediately this morning … because she lied to me.”

Christie also said he had lost confidence in campaign manager Bill Stepien’s judgment. He said he had asked Stepien to withdraw from next week’s election for chairman of the New Jersey Republican Party and from his consultancy role with the Republican Governors Association, which Christie chairs.

“All I can do is apologize for the conduct of my staff; I can’t turn back time," Christie said.

“In the end, I have 65,000 people working for me every day, and I cannot know what each of them is doing at every minute.”

In September, officials said the bridge access lanes were closed for a traffic study.

When allegations surfaced last year that the traffic jam was some type of political payback, Christie reacted by saying, "I was actually the guy working the cones out there. You really are not serious."

Christie said he brought his senior staff together last month and gave them one hour to divulge any information they had about the lane closures. When no one came forward, Christie said he was assured he could tell the media that no one on his staff was involved in the matter.

Now, Christie says, that was "obviously a lie."

"I would never have come out here four or five weeks ago and made a joke about these lane closures if I ever had an inkling that anyone on my staff would have been so stupid to be involved, and then so deceitful as to not disclose that information ... when asked by a superior," he said Thursday.

After the emails were released Wednesday morning, Christie's office stayed quiet for hours until he released a brief statement, saying he had been misled by a member of his staff, and that the behavior was "not representative of me or my Administration in any way."

The documents lay out the closures in some detail.

On Aug. 13, Kelly wrote, "Time for some traffic problems in Fort Lee." To which Wildstein responded, "Got it."

On Sept. 6, Wildstein sent an email to Kelly that included a statement to release announcing the traffic study. "We are ready to do this, can you have someone call the Mayor of Springfield and tell him that Gov has approved $60k for their traffic study."

The included announcement read: "The Township of Springfield has requested LAP funding for a Master Plan Re-examination Report. The Township requested that the Re-examination include a critical Traffic Study for Morris Avenue to assist in the redevelopment of the downtown and a Sustainability Element to assist the Township in getting certified by Sustainable New Jersey. $60,000."

In a series of heavily redacted messages Sept. 10, Baroni wrote Wildstein, saying, "Presently we have four very busy traffic lanes merging into only one toll booth..... The bigger problem is getting the kids to school. Help please. It's maddening."

'Is it Wrong That I am Smiling?'

Shortly after Baroni sent this message, an unnamed person forwarded it, adding, "Sokolich text to Baroni." Another unnamed person replied, "Is it wrong that I am smiling?"

Then, on Sept. 17, a message between two unnamed parties read: "From sokolich to Baroni: We should talk. Someone needs to tell me that the recent traffic debacle was not punitive in nature. The last four reporters that contacted me suggest that the people they are speaking with absolutely believe it to be punishment. Try as I may to dispel these rumors I am having a tough time."

Christie said he would travel to Fort Lee Thursday afternoon to apologize to Sokolich in person and to the town's residents.

"I think they need to see me do that in person," Christie said. Christie was informed mid-press conference that Sokolich responded, telling Christie not to show up, saying his visit would be "premature" and "disruptive."

Christie, determined to make an in-person apology, traveled to Fort Lee anyway, where Sokolich accepted a meeting with him Thursday afternoon.

"I'm glad he came. I take him for his word, which is he had nothing to do with it. We're not rooting for facts to come about to suggest he was involved," Sokolich said, according to CNN.com.

"Mayor Sokolich was never on my radar screen. ... I never saw this as political retribution because I didn't think he did anything to us," Christie said, adding, "Until I saw his picture last night on television, I wouldn't have been able to pick him out of a lineup."

Christie reiterated: “Just so we’re really clear: I had no knowledge or involvement in this issue, in its planning or its execution, and I am stunned by the abject stupidity that was shown here, regardless of what the facts ultimately uncover.”

Christie has pledged to have individual discussions with each member of his senior staff in the coming days.