A promising new painting technique being piloted aboard the USS Dwight D. Eisenhower may change the way the Navy does industrial painting on all of its aircraft carriers. 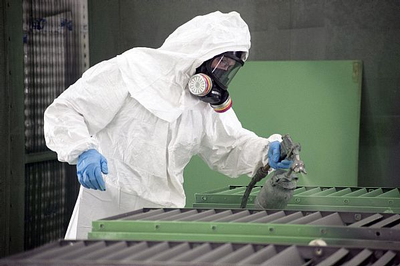 The new regimen basically substitutes liquid-applied coatings for powder coatings and the sailors' elbow grease for that of shipyard workers.

The Navy says the new process saves time and money and benefits both the sailors and the shipyard workers.

Powder-coat painting, the most common technique used to paint multiple components at the shipyard level, consists of electrostatically charged powder being applied to a surface. After the powder is applied, the component is baked in an industrial oven—a process that can result in delays and higher costs, said Lt. Michael Floyd, AIMD's IM-2 division officer and LIFAC coordinator.

"In the past, painters used powder coating for these, but it wasn't very effective," Floyd said. "Now we have the capability and the resources to do the job ourselves and to do it more efficiently."

The new process begins when the drip pans arrive at the LIFAC headquarters on Norfolk Naval Shipyard, the Navy said in an announcement.

"There, we sandblast each piece, removing any paint and corrosion," said Aviation Structural Mechanic 1st Class Josh Hinson, LIFAC's leading petty officer. "We then make any necessary repairs before moving over to the spray painting booth."

Once the painters inspect the drip pans one more time, they apply green primer before spraying on a coat of special anti-sweat paint.

While the process is run almost entirely by sailors, civilians remain instrumental to getting the job done, the Navy said.

"We've been getting some good training from the shipyard workers that we can use the entire time we are here," said Aviation Structural Mechanic 3rd Class Dominique Fletcher, LIFAC's powder coating supervisor. "It would be a lot harder to do this without them."

Added Floyd: "For us, it expands our capabilities and gives everyone some additional training on different painting applications. We are normally used to painting airplane parts; now, we are moving on to bigger things."

Hinson said the shipyard workers also benefited from sailors taking over some of the painting responsibilities.

"Now that we are able to do the painting on our own, we don't have to pull shipyard workers from other important jobs that are being done," Hinson said. "We can paint on our own time and have our parts back instantly."

Floyd says the Navy has plans for the new wet painting program beyond Ike and Norfolk Naval Shipyard.

The Commander, Naval Air Force Atlantic;  Naval Sea Systems Command; and the shipyards are working together on a "more permanent plan," Floyd said.

"Hopefully, this can be an ongoing thing," he said. "We are planning on working with the Truman and setting up for them to the do the same thing. We've already passed to them the entire process, from checking the materials out to getting the proper training."

Fletcher gives the program a thumbs-up.

"I think it is awesome to know that what we are doing here contributes to making Ike ready to get back out there again," he said.