Hundreds of tons of lead-laced soil has been removed from a public housing complex in Newark, NJ, after a $1.4 million, year-long effort by the Environmental Protection Agency and partners.

The EPA announced that it had removed about 650 tons of lead-contaminated soil from the grounds of the Millard E. Terrell Homes public housing complex on Dec. 23, 2013. 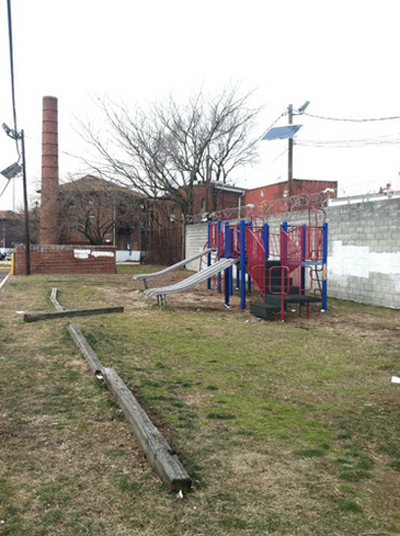 Images: EPA
Officials removed about 650 tons of lead-contaminated soil from the former playground area and other locations at the Millard E. Terrell Homes public housing complex in Newark, NJ.

The agency said that in December 2012, it found high levels of lead in the playground area and other locations that likely originated from industrial facilities that once operated in the area.

Many of the samples contained levels above 400 parts per million—the EPA's standard for play areas.

According to project information, Terrell Homes was constructed on a portion of the property formerly occupied by the New Jersey Zinc & Iron Company. It was one of the first commercial zinc oxide plants in the U.S. and operated on the location from 1848 to 1910.

In addition, the Barth Smelting Corp. operated a smelting facility on a neighboring property from at least 1946 until the late 1970s.

Elevated lead levels were found in the top two feet of soil throughout the playground area. After testing, the Newark Housing Authority removed the playground equipment and the EPA installed a chain-link fence around the former play area to restrict access to the soil, the agency said.

During the spring and summer of 2013, the EPA continued to collect soil samples from the unpaved areas of the Terrell Homes property.

Subsequent testing results showed that additional locations behind the community building extending from the neighboring property line to approximately 25-30 feet onto the Terrell Homes property also had high levels of lead in the surface soil.

Officials excavated about 650 tons of soil from the former playground area and the northern property line and filled the area in with clean soil, according to the agency. Full project details are available here.

In addition, the neighboring property owner, 99 Chapel Street Partners, will install a barrier wall along the property line to prevent future movement of lead-contaminated soil from its site from moving onto the Terrell Homes property.

Complete restoration of grass, shrubs and trees is planned for spring 2014, EPA says.

The EPA worked with the Newark Health Department; the Newark Housing Authority; a local community-based organization, the Ironbound Community Corp.; and residents of the Terrell Homes to address the threat to children’s health.

Lead is a toxic metal that can cause damage to a child’s ability to learn and a range of health damage in adults.

“Exposure to lead can have lifelong effects on children’s health and their development, which is why the EPA took steps to reduce potential exposure to lead in the soil at the housing complex,” said Judith A. Enck, EPA Regional Administrator.