The Plaza at Black Mountain sits at the center of Cave Creek, Arizona, in the upper Sonoran Desert. Its exterior had lackluster curb appeal after years of weathering from high temperatures and harsh UV rays that caused the brown stucco to fade to a light gray and eventually wash out. This left the façade exposed to damaging elements.

In January 2010, the shopping plaza's façade was coated with NeverFade Façade Restoration Coatings with Kynar Aquatec. According to manufacturer APV Engineered Coatings, the exterior coating is formulated for long-term durability and high resistance to the UV degradation that results in chalking and fading.

Local painter Kelly Mattes started by power washing the faded stucco, then primed the surface with APV's W-1500 Primer. A custom-blended NeverFade Original Topcoat in Sahara Yellow was roller-applied to the entire surface.

"NeverFade was extremely easy to use," said Mattes. "It had a creamy texture that leveled out nicely and allowed the stucco to be painted in one coat. Even when using a roller or brush, the surface looks like it was sprayed. And because it was water-based, clean-up was a breeze."

Impressed with the results, Mattes said he also chose the coating to paint a series of brightly colored, high-end murals on concrete walls throughout the area. The murals, he noted, are still as striking as they were when first painted nine years ago. 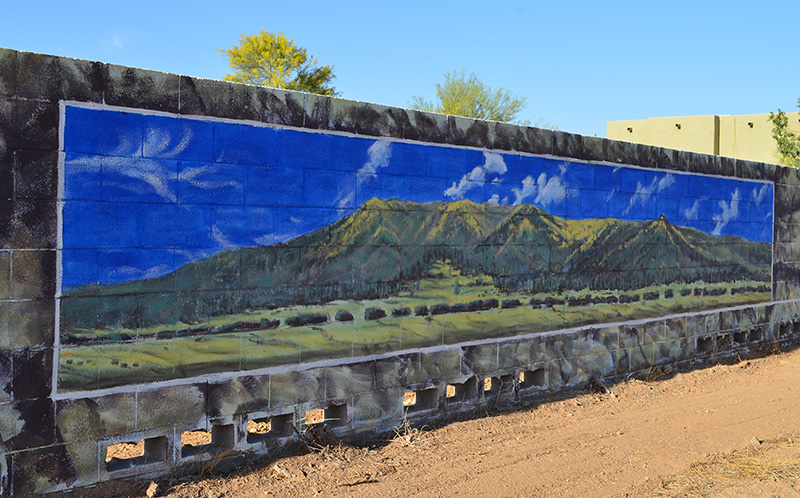 The Plaza has undergone several changes in the years since it was coated. When Mattes first applied the coating, he painted around the shops' existing signs. In October 2012, one of the tenants moved out and took down their sign, leaving the bare stucco exposed.

Stucco is known to exhibit settling cracks that must be repaired to prevent water migration into the structure. When a repair or patch is made, the contractor typically paints over this area to protect it from future damage. However, it can be difficult to match the color of the newly coated section to the weathered, previously coated section. That color difference can be dramatic depending on how long the painted surface has been exposed to the elements. Because NeverFade resists chalking and fading, Mattes was able to fill in the small area at a perfect match to the rest of the building.

Two years after repainting, when a shop sign was removed, the bare stucco was filled in with NeverFade Coatings, and it perfectly matched the rest of the building.

Another tenant had hung a banner outside his shop after the building was freshly coated in 2010. When the tenant retired in mid-2019, the banner was removed, and behind it, the area protected from the sun was identical in color and appearance to the rest of the wall.  “You could not identify that the banner had ever been on the building — after nine years,” said Mattes. Reinspection of the façade in June 2019 indicated that the coating appeared unchanged.

According to APV, Kynar Aquatec is a water-based emulsion containing polyvinylidene fluoride (PVDF), known for its durability and extended service life. This grade can cure at ambient temperatures, allowing the finished coating to be air-dried and applied in the field. The polymer prevents the coating from degrading in harsh sunlight and allows it to resist dirt pick-up and mold and mildew growth as well as stand up to challenging environments.

Complex inorganic pigments and other additives are incorporated into the emulsion to produce a durable, low-VOC coating that can be sprayed, brushed and roll-applied to substrates that include metal, brick, concrete, stucco, fiber cement, EIFS, wood and polymeric building materials.

Claims or positions expressed by sponsoring authors do not necessarily reflect the views of TPC, PaintSquare or its editors.
NeverFade® is a registered trademark belonging to APV Engineered Coatings, Inc.
Sold under a trademark license from Arkema, Inc., the owner of the Kynar Aquatec® trademark.
SEE ALL CONTENT FROM THIS SPONSOR
Tweet
ADVERTISEMENT