An often overlooked but critical component to abrasive blasting is the controls. Many blast controls offer little more than start/stop options, but with a few simple changes, safety and performance enhancements can be added almost immediately. Here, we discuss several upgrades that deliver measurable results when applied to blast systems that utilize normally closed abrasive metering valves such as those by Schmidt Thompson and some by Marco, Pirate and others. 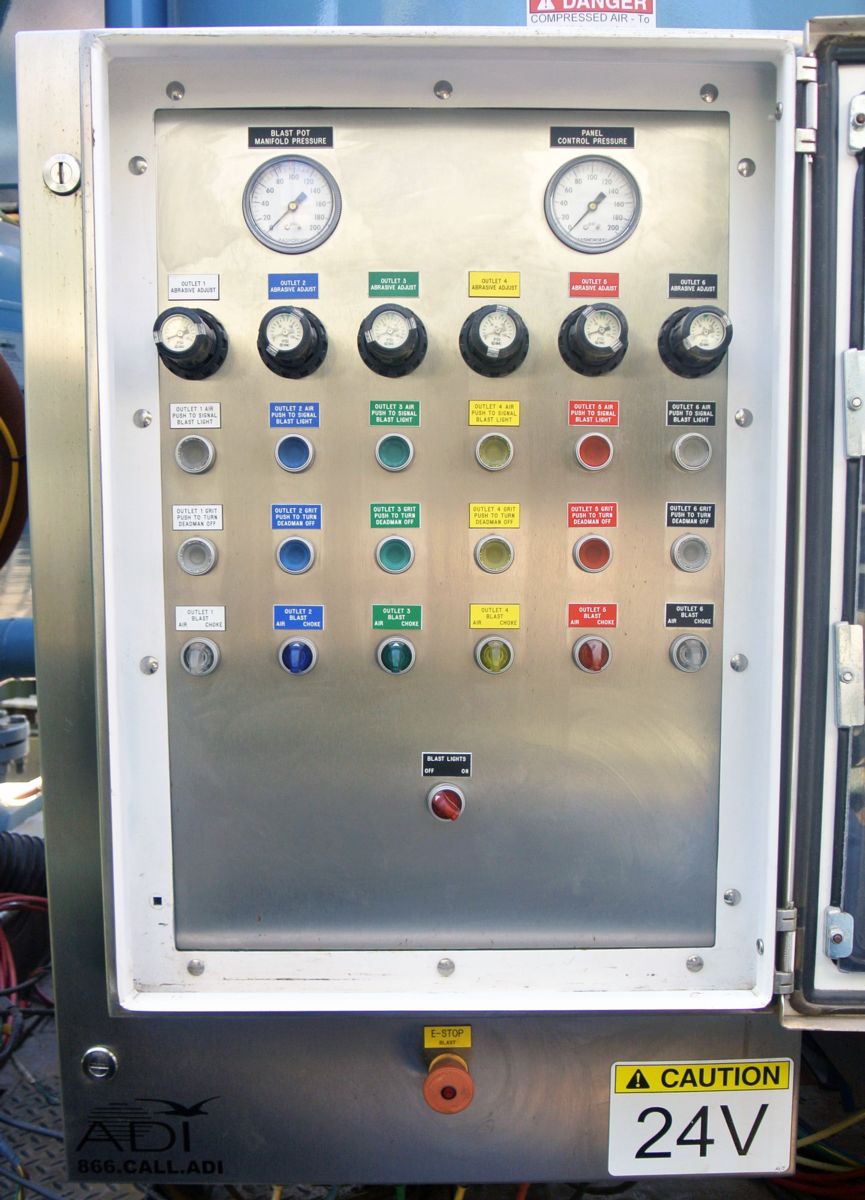 By implementing blast control upgrades, the blaster can improve safety and efficiency by up to 15%. PHOTOS COURTESY OF ATLANTIC DESIGN, INC.

For safety reasons, an effective blast control system must have basic start-and-stop functions; however, certain enhanced performance upgrades can provide greater safety as well as cost savings. An obvious first option is a remote abrasive cut-off/blowdown, or blast-air cut-off/choke, at the blast nozzle. This is achieved with widely available three-wire and four-wire deadman switches, which can eliminate the need for the blaster to signal the pot operator to initiate a manual air choke or grit blowdown. The three-wire controls can offer blast along with either the choke or blowdown option, depending on how the system is wired. The four-wire system offers both of these and, with two independent toggles at the switch, the ability to choke or blowdown without requiring a blast turnoff — a dramatic time saver.

Another situation where the four-wire deadman features are advantageous is on projects with large vertical elevation changes in the blast lines where grit is prone to load up in the bottom elbows of the line when blasting is stopped. When blasting is started again, this large buildup of abrasive must be pushed through the hose, which almost always results in very powerful and potentially dangerous shaking at the nozzle. If the control system is equipped with a four-wire deadman, operating the blowdown switch before the blast switch is released will stop the grit flow but not the blast air. Once the blowdown switch is activated, the blast switch can be released and the blaster can hold the blowdown until the grit is cleared. Once all the grit is out, the blaster can release the blowdown and bring a safe end to the blast cycle. 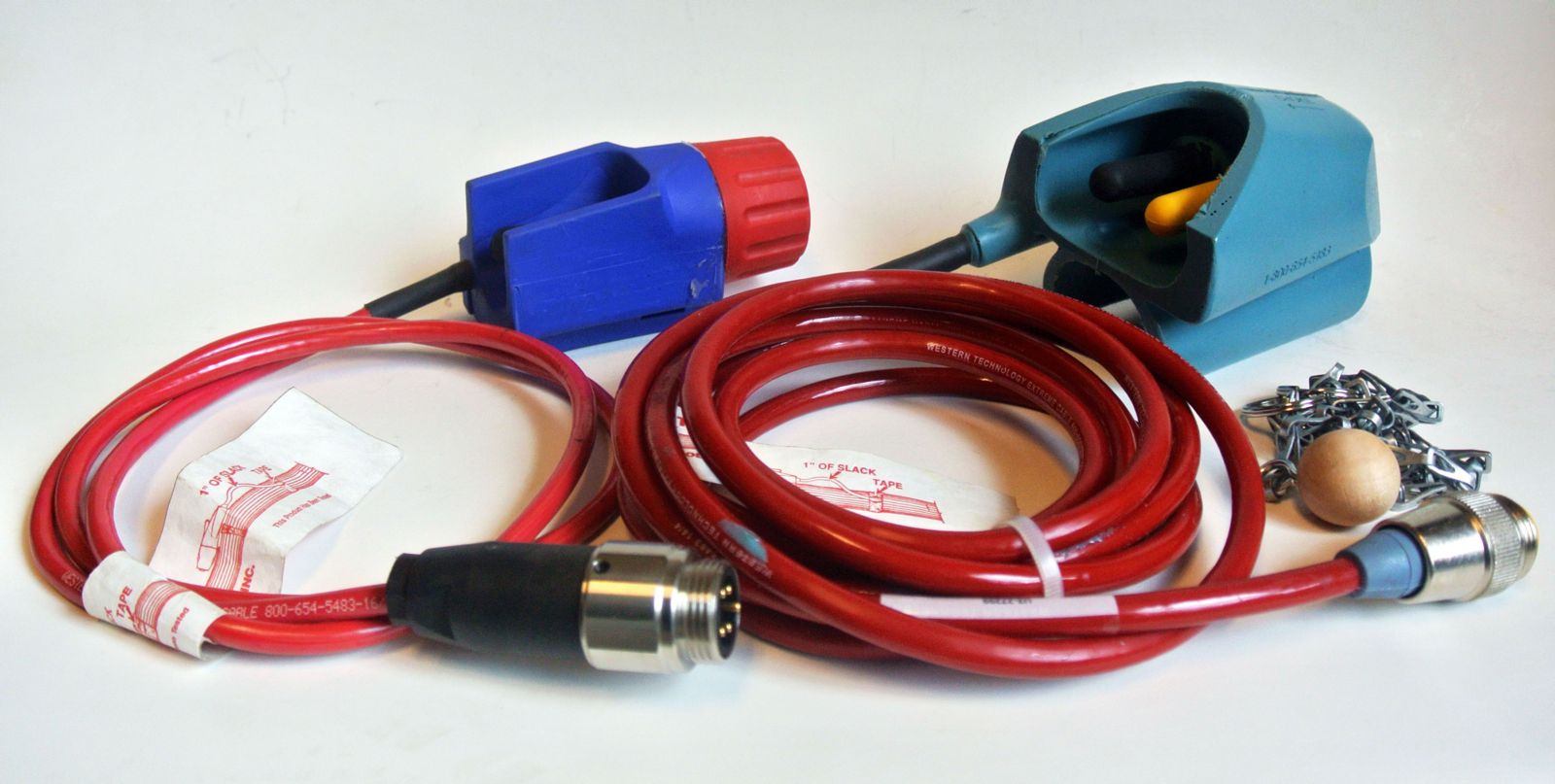 Three-wire and four-wire deadman switches provide remote abrasive cut-off/blowdown, or blast air cut-off/choke control options, that can be controlled at the nozzle instead of the blast pot.

The grit on delay is another useful timer that turns on the air for a few seconds before the grit feed valve is opened. This option affords the blaster some time to use the air to clean out any grit that might have been left in the blast hose before releasing a new blast of grit. When controlled properly, this type of blast start keeps the hose clean and provides for a smoother startup experience with less chugging and jolting at the nozzle from grit buildup.

Also, when setting the deadman switch, often the blast will turn off and on in rapid succession, which starts and stops the blast several times before it is locked on, causing premature wear and tear as well as extra and more powerful jolting at the nozzle as the blast comes on. The blast air on delay, which delays the whole blast cycle a couple of seconds before starting, eliminates the jumpy starts while the deadman switch is engaged.

Beyond timers and delays, there are other control adjustment options such as the popular remote abrasive adjustment. This feature allows the pot operator to adjust the abrasive grit flow at the control panel, which is at a much safer distance from the blast hose than directly under the blast pot. An additional remote abrasive adjustment feature is the full open choke option, or “big mouth” choking. This fully opens the normally closed grit feed valve during choking but then automatically returns to the partially open blast setting and eliminates having to drop the grit valve during normal blasting. So now the operator can adjust both the grit and choke without getting under the pots. 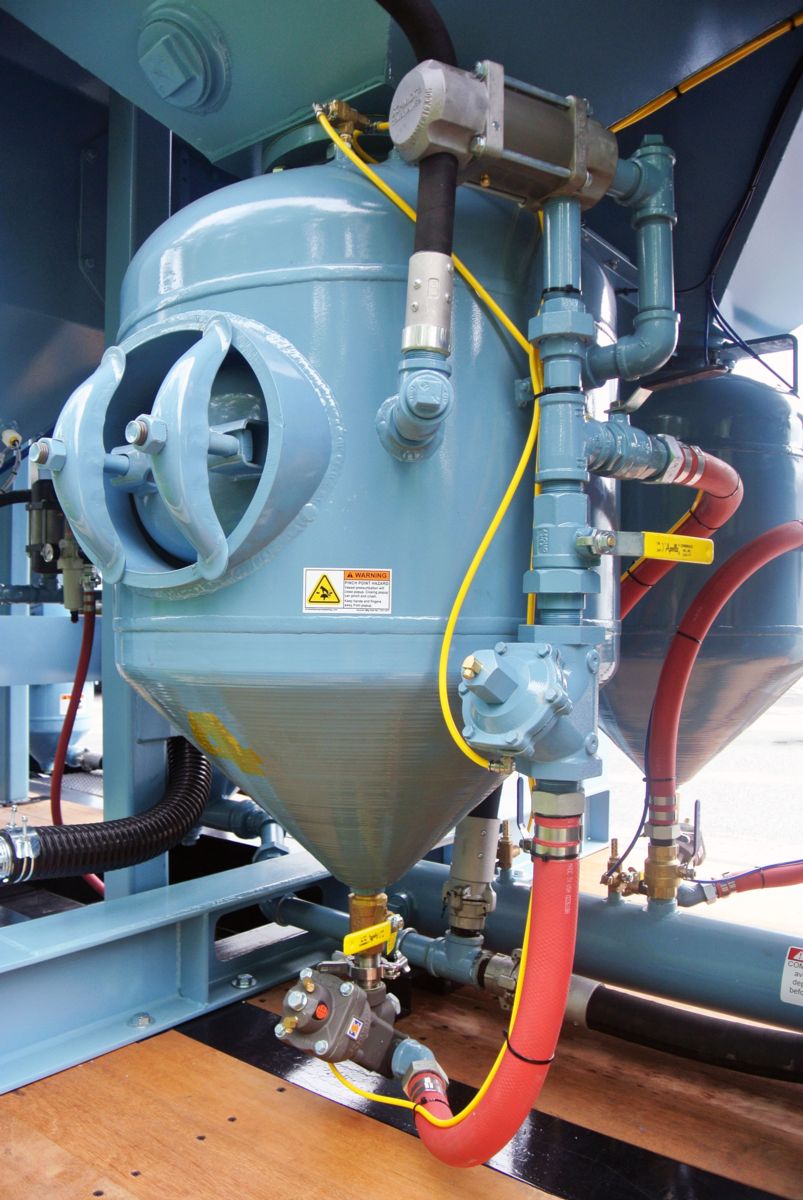 Enhanced control features allow the operator to control grit and air flow from a safer distance instead of needing to get underneath the blast pot to access the valves.

Other enhancements include clocks and counters to better track actual blast times as well as email and text remote monitoring.  These features assist in accurate project costing, equipment maintenance and production schedule monitoring.

By implementing some of the above blast control upgrades, the blaster can improve safety and efficiency by 10% to 15%. That is 10% to 15% for every hour blasting. With quick and minimal blaster training, these kinds of improvements are easy to onboard.  The results are immediate and will last the life of the machine. Ask your supplier what blast control upgrades you can add to your next purchase that will improve safety and production for any air blast system.