An unusual team approach and project innovations — including the engineering of a specialty garnet for surface preparation — lead to industry firsts and an SSPC award for excellence.

The nuclear-powered aircraft carrier USS George Washington (CVN 73) is in year two of a major mid-life overhaul to prepare the 80,400-ton vessel for the second half of its operational life. The maintenance and modernization, known as refueling and complex overhaul (RCOH), includes restoration of the ship’s massive superstructure and steel hull, upgrades to the radar and weapons systems and refueling of the nuclear reactors.

In August 2017, after 25 years in operation, the 1,100-foot aircraft carrier entered Newport News Shipbuilding’s dry dock  to undergo the $2.8 billion overhaul that will take nearly four years to complete. After RCOH, the modernized aircraft carrier will be returned to the U.S. Navy to continue its service to the nation’s defense. 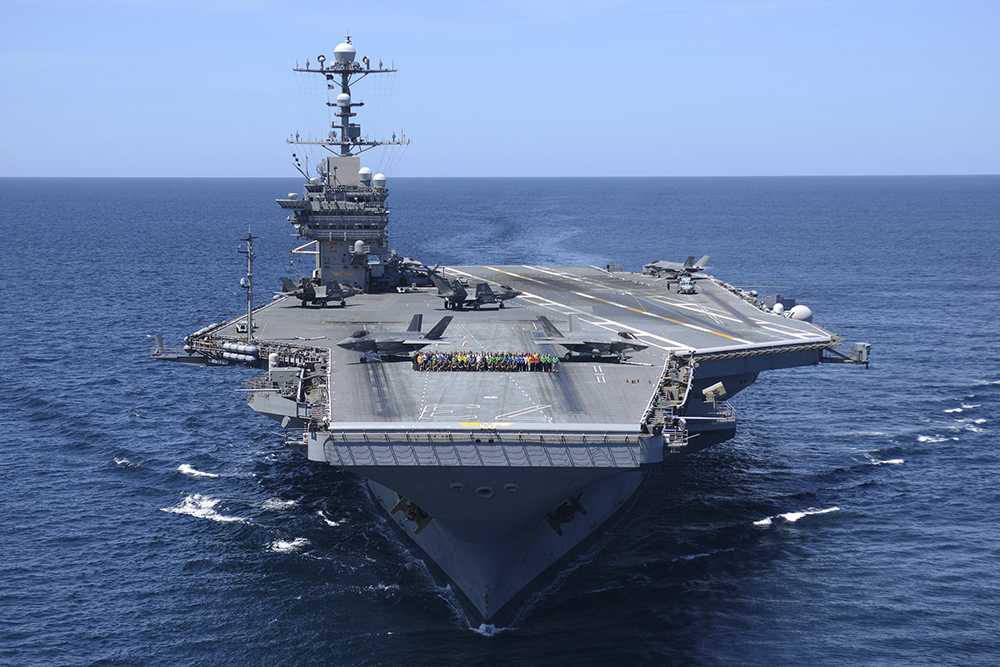 MAC took a unique, collaborative approach to optimizing the outcome of the project. Two teams of equipment representatives and materials manufacturers — one for surface preparation and one for preservation — were recruited to come together on the project’s planning and execution.

“These teams included competitors who worked as partners to assist throughout the planning and execution phases,” said MAC president Vinny D’Auge. “The goal was to work together in the development of new processes and to enhance existing methods with the priority of improved environmental and health safety on the job site.”

the right choice for surface prep

MAC initially quoted the blasting portion of the contract using coal slag, the conventional abrasive used for resurfacing a ship’s exterior. Coal slag is the same material used by the contractor on the previous five RCOH projects. But OSHA had recently started investigating environmental regulations around beryllium — the metal found in many coal-based abrasives that has been linked to lung disease and other potentially fatal illnesses — and NNS had concerns over worker safety. MAC was tasked with finding a beryllium-free substitute for coal slag.

After testing a series of coal slag substitutes, MAC identified Barton’s garnet as the most effective, environmentally friendly MIL-SPEC substitute for removing the 15-40 mils of Mare Island epoxy coatings from the ship’s surface.

“We spent months testing a wide variety of materials to blast the hull, and our testing kept coming back to Barton garnet as the best choice. It was the most productive, and because it produced less dust, it offered a safer work environment,” said D’Auge.

For the first time, an East Coast shipyard used garnet to blast a carrier’s entire exterior. Over 6,500 tons of Barton garnet were used to blast more than 1.2 million square feet.

Surface preparation on the underwater hull and freeboard was executed using vapor blasting equipment, a first in the history of carrier restoration. The custom equipment was supplied by Massachusetts-based Greener Blast Technologies and operated using Barton garnet abrasives. This method reduced abrasive consumption, lowered dust levels, improved worksite visibility and safety, and allowed MAC to blast near adjacent work. Daytime crews vapor blasted about 200,000 square feet of the ship’s underwater hull and portions of the freeboard.

The remaining areas were dry blasted. Dry blasting only at night has been standard practice, but the low-dusting properties of the Barton garnet allowed MAC to dry blast during the day. This process marked the first such approach in carrier restoration history. 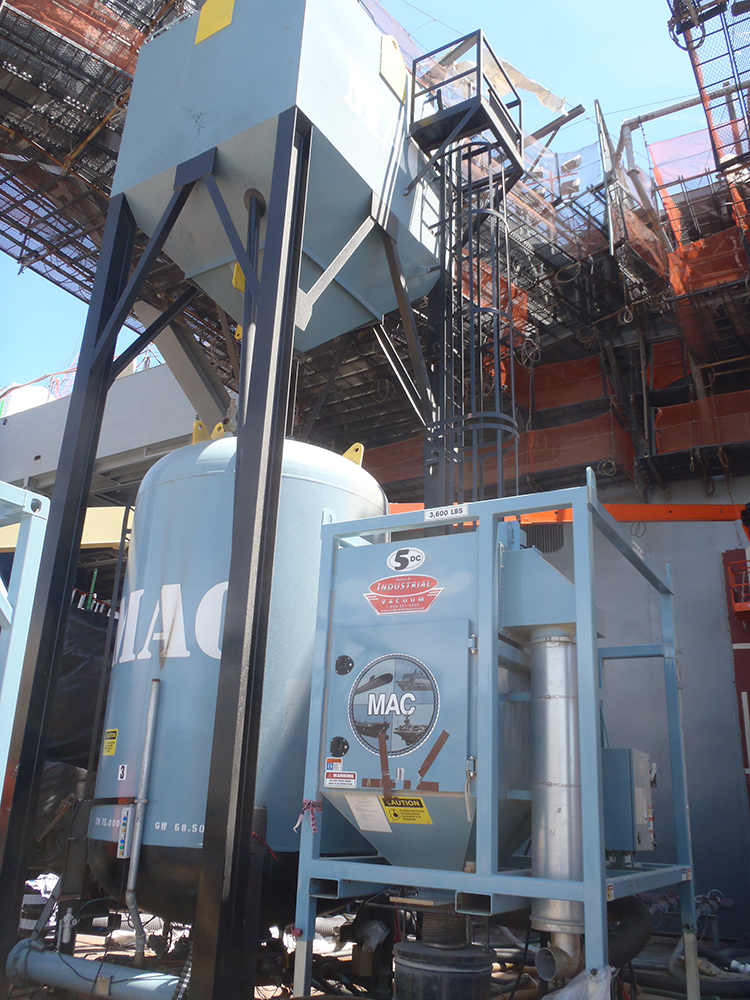 going above and beyond

Barton International, a family-owned company, developed a new abrasive, 30/60 CG Adirondack Garnet, in January 2018 that was specially engineered to meet the needs of the USS George Washington contract. The name of the abrasive signifies where the garnet is mined, in upstate New York’s Adirondack Mountains, which surround Barton’s headquarters in Glens Falls.

Barton also provided technical expertise and prepared the detailed documentation needed to meet MIL-A-22262B(SH) traceability and product compliance. The garnet performed so well, D’Auge noted, that going forward, all of MAC’s blasting will use garnet instead of coal slag. 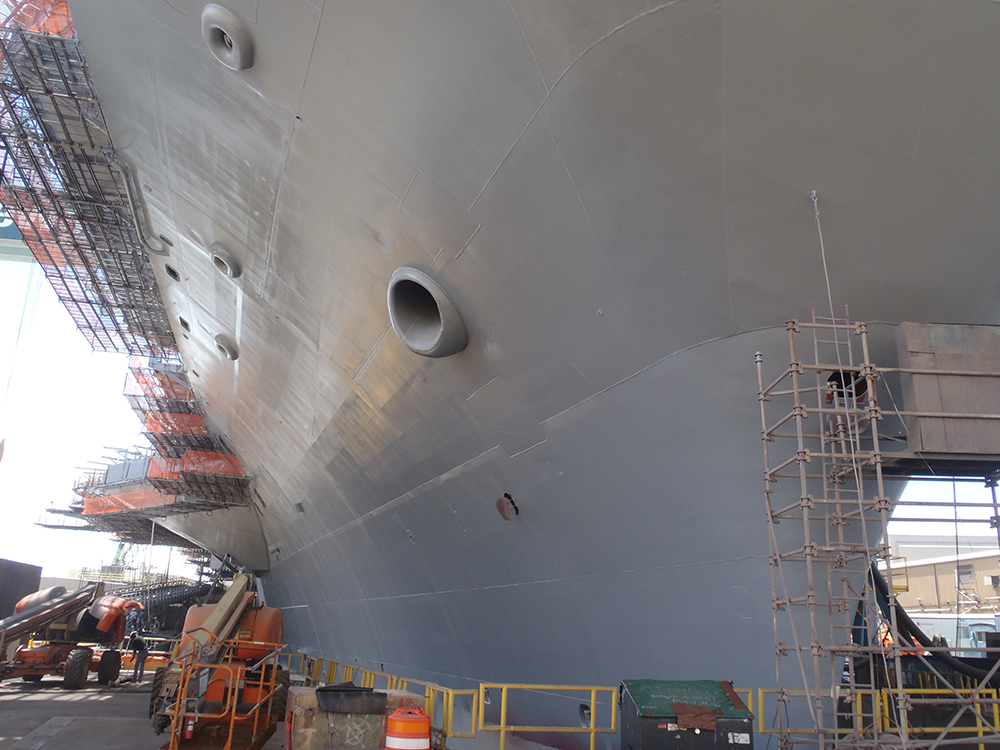 The freshly prepared and coated bow of the USS George Washington (CVN-73). PHOTO: COURTESY OF MAC

Claims or positions expressed by sponsoring authors do not necessarily reflect the views of TPC, PaintSquare or its editors.
Tweet
ADVERTISEMENT