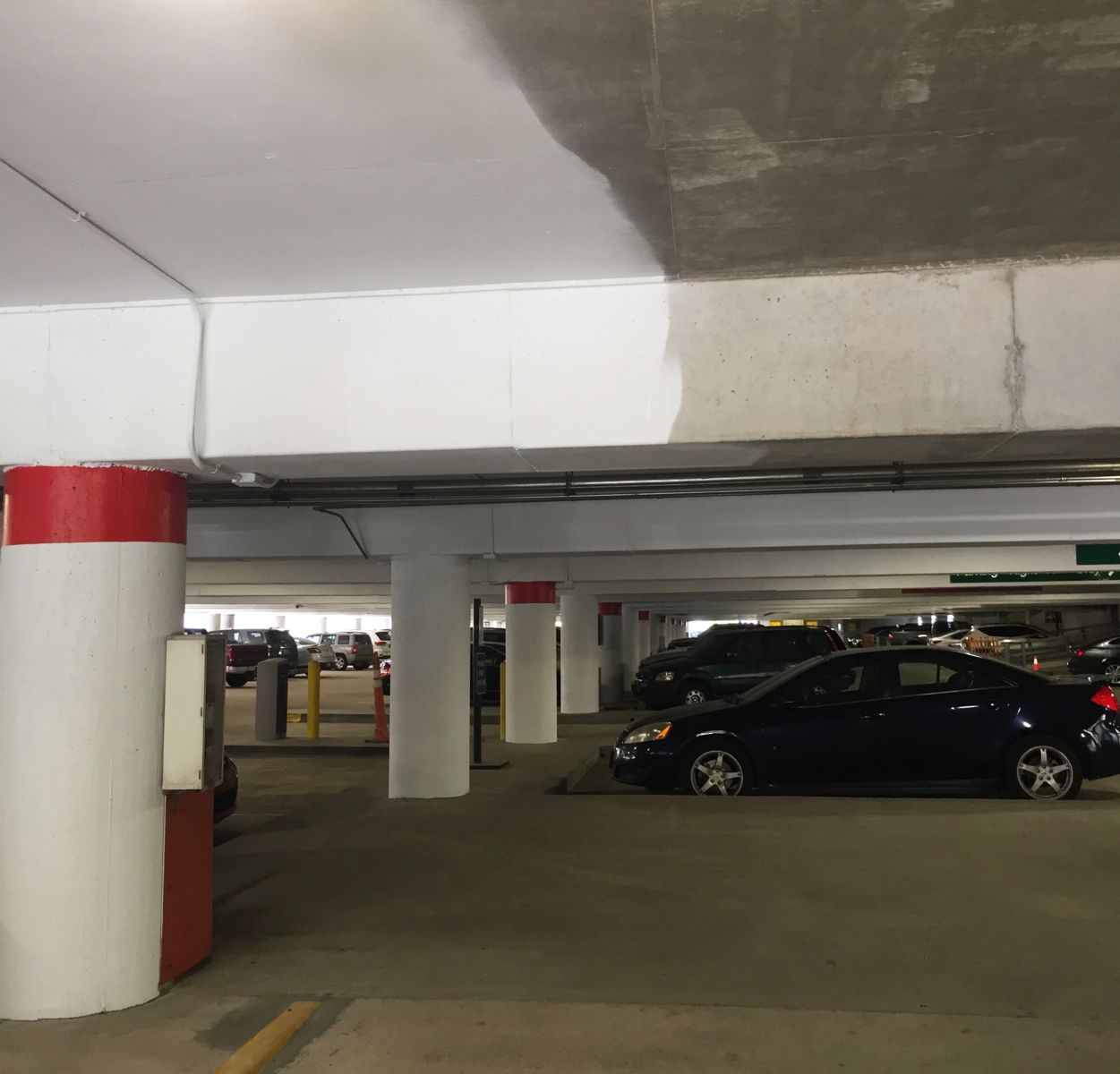 Shown in progress, the job included painting the lot's gray concrete (right side) with a light-reflective coating (left side) to brighten the space.

In Birmingham, Alabama, the Birmingham-Jefferson Convention Complex (BJCC) hosts guests and employees of the city’s popular uptown hotels and restaurants as well as attendees of the myriad concerts and events staged at the complex arena, concert hall, exhibition hall and meeting spaces. One of the BJCC parking lots was long overdue for a fresh paint job, and Vulcan Painters was chosen to give it a lighter, brighter look.

Painting Parking Lot 2 with minimal disruption to staff and visitors posed several challenges, including estimating the number of spaces that could be cordoned off and painted at one time, securing those spaces, rerouting traffic and avoiding overspray on cars. One of the biggest challenges was tactfully extracting spaces from users who resisted altering their parking habits during the project. Additionally, valet parking spaces had to remain available to the venues they served.

Complex owners chose light-reflective coatings and bright color accents to liven up the gray, concrete lot. Colors with cheerful names, such as Laughing Orange, African Violet, Stop Red and Blue Chip were applied to elevators, support pillars and stairwells and used to color-code the different levels. These bright hues were so popular that the owners extended the accent areas. 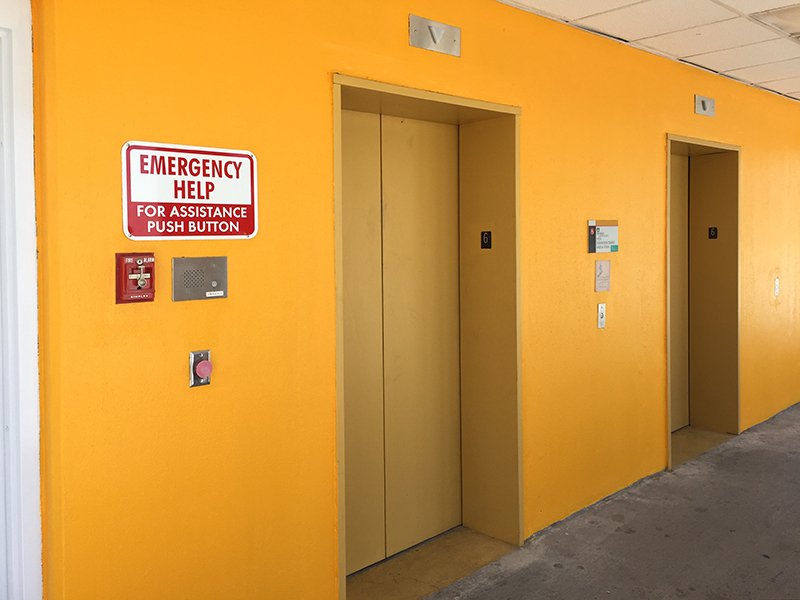 The new, cheerful color-coding makes navigating the parking lot easier. Shown, above, is the top-floor elevator bank and, below, are two examples of painted stairwells. 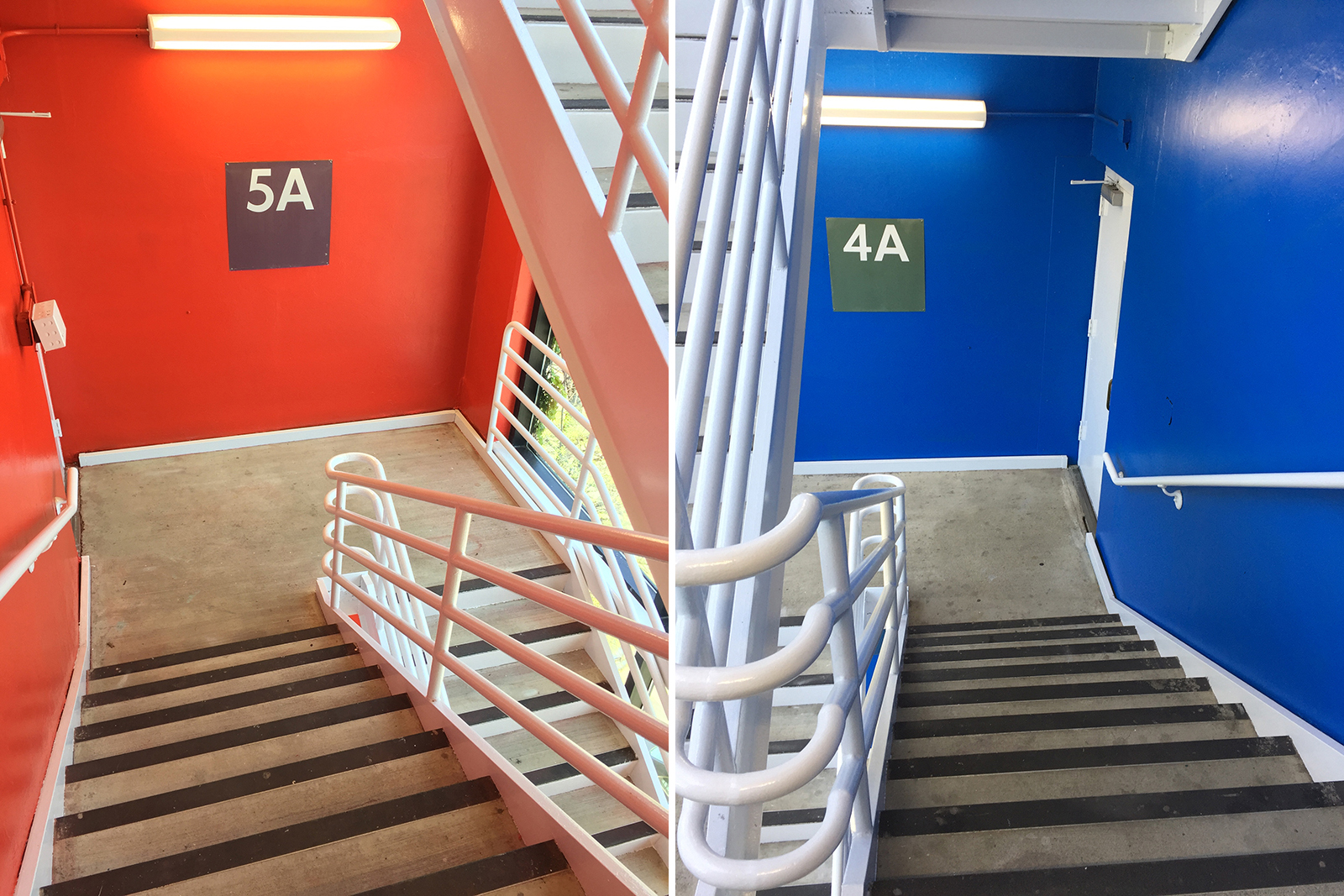 The job started December 25, when staff of the Southeastern Conference (SEC) headquarters would be on a week’s vacation, leaving parking places available to paint. Because of the cold temperatures, the work space was heated with two 300,000K BTU kerosene indirect heaters, using 10-mil poly for containment.

The original schedule called for painting the garage’s six floors, divided into upper and lower levels, and 1,500 parking spaces during a five-month period. Owners used the hotels’ occupancy levels and entertainment scheduled at local venues to calculate the number of parking places that could be blocked off and painted at any given time.

The time to complete the job expanded as the owner decided to stop work whenever the most popular events drew especially large crowds. For example, painting was delayed for two weeks during a production of The Lion King and for shorter periods when highly popular concert tours, such as the Eagles, came to town.

As summer approached, Vulcan Painters moved to two shifts, with as many as 20 painters, to complete the project with minimal disruption. As for the finished project — what a difference the paint makes!