Flash rusting, clogged nozzles, and fish eyes are common problems that can occur in the blast & paint industry due to the poor quality of compressed air — often called the fourth utility. The quality of the utilities you use is critical. Would you want to drink contaminated water? Have poor-quality natural gas that produces too little heat? Deal with continuous power interruptions? Obviously not. You demand high-quality water, gas and electricity.

Contractors who use compressed air should expect the same level of quality, even if it’s generated by their own air compressors. 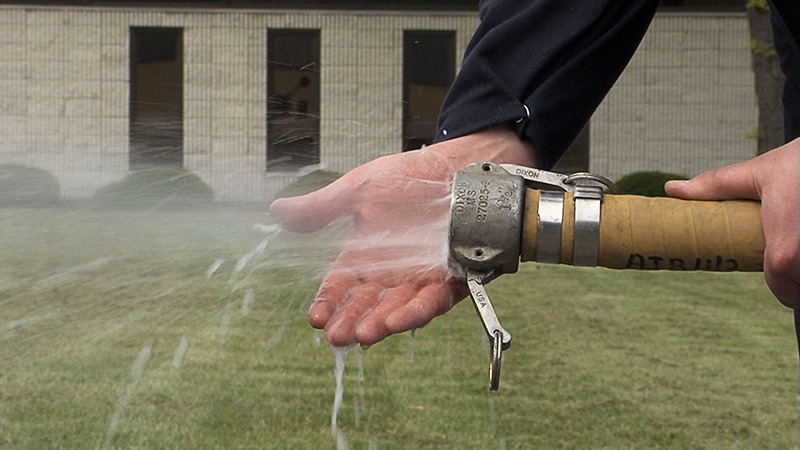 2. Capture the condensed water. Cooling compressed air from 185 F to 95 F will condense a large amount of liquid water. An efficient moisture separator is needed to trap the water. Even a small 185 CFM portable air compressor, operating on an 85 F summer day with 70 percent relative humidity, has the potential to produce 1.8 gallons of water per hour. Approximately two thirds of the moisture vapor introduced into the system will condense out as a result of the compressed air passing through the aftercooler. This means 1.2 gallons of water need to be removed per hour or else it will move down the hose to the blast pot, spray nozzles, or paint gun.

3. Remove the condensate. All of the water and possibly some compressor lubricant carryover trapped in the separator must be eliminated from the compressed air system. Either a ball valve needs to be used to manually drain the separator or an automatic drain valve, such as Van Air Systems’ PDV, MDV or EDV. If the condensate is contaminated with compressor lubricant, it has to be disposed of properly in order to comply with EPA regulations.

The Blast Pak PRO from Van Air Systems is a portable, single-tower deliquescent desiccant drying package, engineered specifically for use by blasting and painting contractors. The Blast Pak Pro is a solution for wet compressed air that clogs blast pots, corrodes nozzles, and causes costly rework due to excessive moisture leading to poor surface prep. This complete package is pre-assembled and welded to a forklift skid, allowing for maximum portability in mobile drying applications. With an integrated aftercooler, the Blast Pak Pro first cools hot air discharged from the compressor. Cooling forces a substantial amount of moisture to condense, but even after exiting the aftercooler, the air is still saturated with water vapor. The compressed air then passes through the drying vessel which contains Van Air Systems Dry-O-Lite desiccant. The desiccant cuts the humidity of the air roughly in half. Finally, the air flows through an after-filter to remove particulates before going downstream. The contractor is left with cool, clean and dry compressed air for superior blasting and painting quality.