Floating a New Concept for Working at Heights

As one of four movable bridges in the Bronx, the Hutchinson River Parkway Bridge is a critical link to major interchanges in New York City. After opening in 1939 to carry travelers over the Harlem River, this drawbridge — or bascule-type structure — was widened from four lanes to six in the late 1940s and has seen a number of changes in the decades since. One of the major challenges in servicing a movable bridge like this one is gaining access to the structure while allowing traffic flow both over and under the bridge.

When L&L Painting of Hicksville, New York, won the contract to sandblast and paint the underside of the bridge, the team realized that its current decking configuration would not work for the middle lift span. The Coast Guard required that the drawbridge retain its ability to be raised and lowered every other week throughout the life of the maintenance project, and work platforms could not be attached to the lift sections of the bridge during those times. Continually installing, uninstalling, and reinstalling traditional service platforms would simply not work for this project.

The company reached out to Ohio-based Sky Climber, LLC for a solution. Known for its suspended-access work platforms, Sky Climber designs and manufactures scalable, modular work platforms and related equipment for use in work-at-height scenarios. It’s equipment can be found on skyscrapers, wind turbines, cell towers, oil rigs, silos and power plants around the globe. By request, Sky Climber engineers developed a custom deck that would solve the access issue for what L&L Painting described as “a project that was going to be demanding in schedule and logistics.”

The final solution included two custom platforms based on Sky Climber’s Sky Stage Ultra (SSU) Decks, which spanned the total width of the bridge when suspended end to end. The platforms had three very critical features: they 1) were quickly assembled, 2) were easy to install and 3) could float. 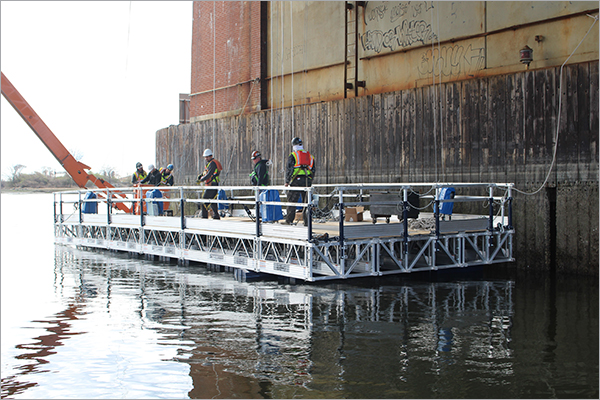 Towing the Sky Stage Ultra deck to the bridge

The deck installation could be completed in a single day. Lightweight platforms were assembled at a nearby marina and towed into place by a small watercraft, thanks to a clever pontoon system under each platform. By adding a self-floating capability, Sky Climber had eliminated the need for its client to employ a barge each time the platforms were to be installed or uninstalled.

With beam clamps, suspension cables and safety lines secured to floor joists under the bridge, the floating decks could be attached quickly and raised into position. Once in place, additional support cables and containment tarps could be installed. Each 16-foot-wide by 45-foot-long deck featured several key Sky Climber components, including central control boxes (CCBs) that controlled LNX electric hoists paired with snatch blocks to double their capacity.

The CCB devices make it possible to maintain a flat work surface, as it allows one person to operate multiple hoists at the same time. Hoists can be individually operated, or several can be operated in unison, unlike some rough suspension systems used in the past (for example, corrugated steel decking or even chain link with multiple vertical suspension points). 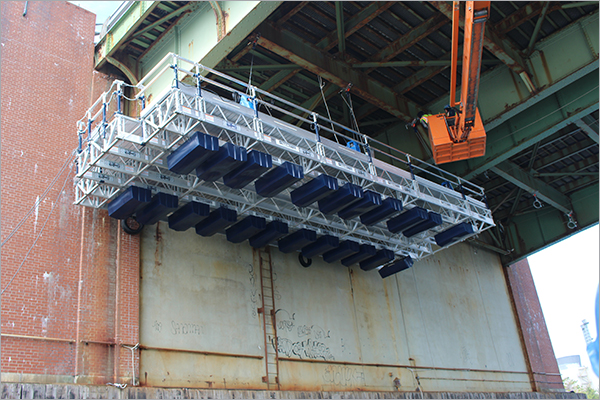 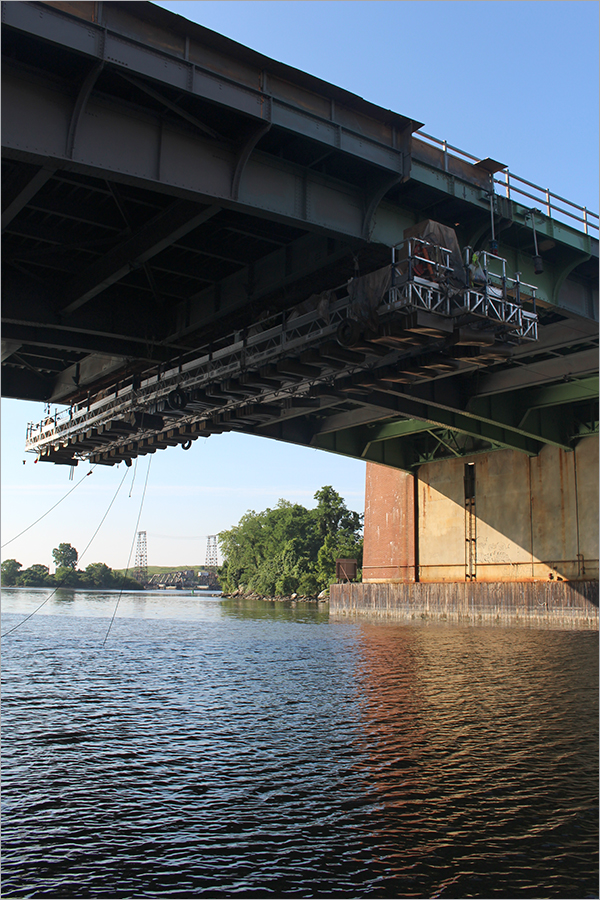 Both suspended platforms together giving access to full bridge width

For these two platforms, the ultimate loading requirements were met by installing additional pick points around the platforms’ perimeters — thus leaving the interior of the work area free of obstructions for the work crew. Plus, the platforms could be easily tarped to contain blast debris for this full-containment project. During operation, a cantilevered design also allowed crews to reach the top of the bridge from the platform with a ladder for easy access.

At the end of each seven-day maintenance phase, each platform was lowered to the water, floated out of the way, and stored until its reinstallation seven days later. This process repeated for the duration of the project until the underside of the lift sections had been completely cleaned and painted.

Mid project, L&L Painting’s Declan Farrington provided feedback on the Sky Climber equipment: “We have installed, broken down and re-installed the platform systems multiple times since they were brought on site. Our familiarity with the system and the simple and effective design have made it a pleasure to use on this project.”

As our bridges continue to age, maintenance teams will be forced to find new ways to access some of the most challenging structures in our landscape. Venturing beyond traditional access solutions will be key for crews to safely reach bridge workspaces, regardless of size, design or purpose. For the Hutchinson River Parkway Bridge, a project at height called for a trip across the water to get the job done right.