Ice buildup creates several different issues for airlines and aircraft operators. When ice accumulates on the wings or fuselage, it can change the geometry of the surface to create more drag and less lift. It also adds weight and makes it more difficult for the aircraft to maintain altitude.

In the aerospace industry, it's common practice to mitigate ice buildup before takeoff and after landing; the process is called de-icing. It involves the use of chemicals and needs to be done repeatedly to ensure aircraft are ready to take flight.

De-icing may be the industry standard, but it comes with caveats. Some industry players have been looking forward to the advent of a new solution that would streamline the ice mitigation process for airlines and create a value-added offering for manufacturers in the industry.

What will it take to break the ice? With the right methodology and rigorous testing, icephobic coatings are poised to become the next big breakthrough in ice mitigation technology.

In the aerospace industry, ice buildup causes issues from a safety perspective and an efficiency standpoint.

“You could potentially get into unsafe situations if you don't have the ability to take flight as quickly or as easily as you should,” says Shiona Stewart, industry marketing manager for Transportation, Industrial Furniture and Floor Coatings at BASF. “Ice can either block the movement of the wings or interfere with the plane's ability to take flight.” Ice buildup, or icing, can add significant weight to an aircraft’s frame, causing increased stall speeds, drag and compromised air flow over the wings.

To prevent the effects of icing, the aerospace industry de-ices aircraft. The process typically involves a chemical called propylene glycol, often combined with other ingredients such as corrosion inhibitors, surfactants, wetting agents and dye. The fluid is usually diluted with water, heated and then sprayed onto the aircraft.

“De-icing is a temporary treatment of the plane body that basically prevents ice from building up in between trips,” Stewart notes. 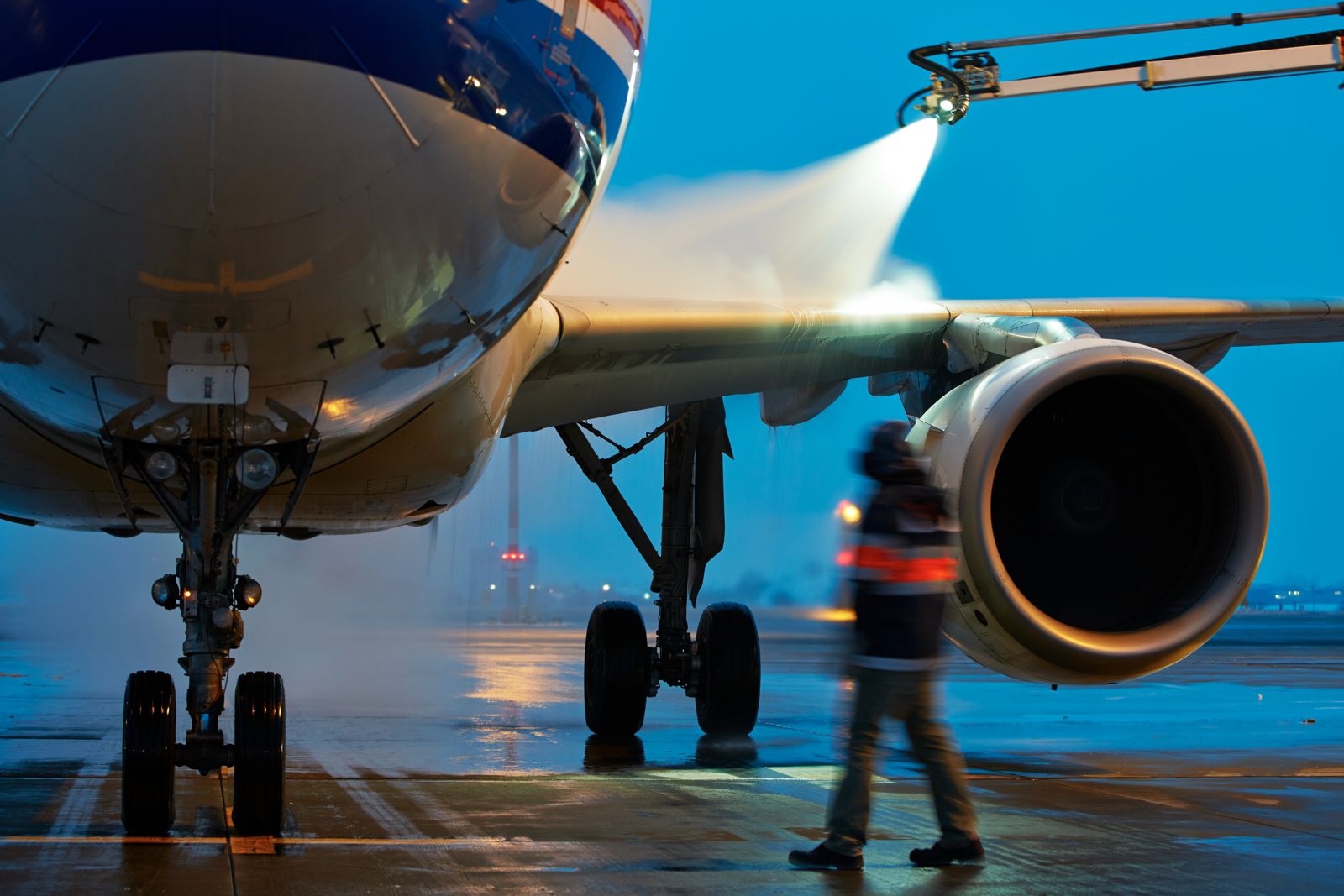 De-icing is a temporary treatment of the plane body that basically prevents ice from building up in between trips.

“Temporary” is the key word. Unlike de-icing, which has to be done repeatedly to prevent ice buildup, an icephobic coating theoretically eliminates ice formation on the coated structure. As a more permanent solution, icephobic coatings could reduce the frequency of de-icing or, ideally, remove the need for it altogether. That means less downtime on the runway, fewer delays and more happy passengers on commercial airlines.

“There’s both a cost savings play and a sustainability play for this type of technology to deliver to the entire value chain,” Stewart adds. By removing or eliminating the need for de-icing, aerospace companies stand to save money on de-icing spray and soften their environmental footprint by reducing the amount of chemicals released into the atmosphere.

Icephobic technology sounds promising on many levels, but the proof is in the pudding. To make those promises a reality, BASF is exploring multiple paths to develop a viable solution for the aerospace industry.

The Dispersions & Resins division at BASF aims to create either an additive that will produce an icephobic coating or further enable its resin technology to have a more robust icephobic function within the coating itself. The division team is exploring three different approaches to make that happen.

The first approach is a super hydrophobic resin technology that will ultimately lower the potential for ice to adhere to the coating surface. With that methodology, the water will bead up and become less adherent to the aircraft’s surface.

“If you can get to a super hydrophobic energy level, you will actually have a high contact angle and water will basically leave the surface at a very low roll-off angle,” says Andrew Recker, technical service specialist for Formulation Additives at BASF. 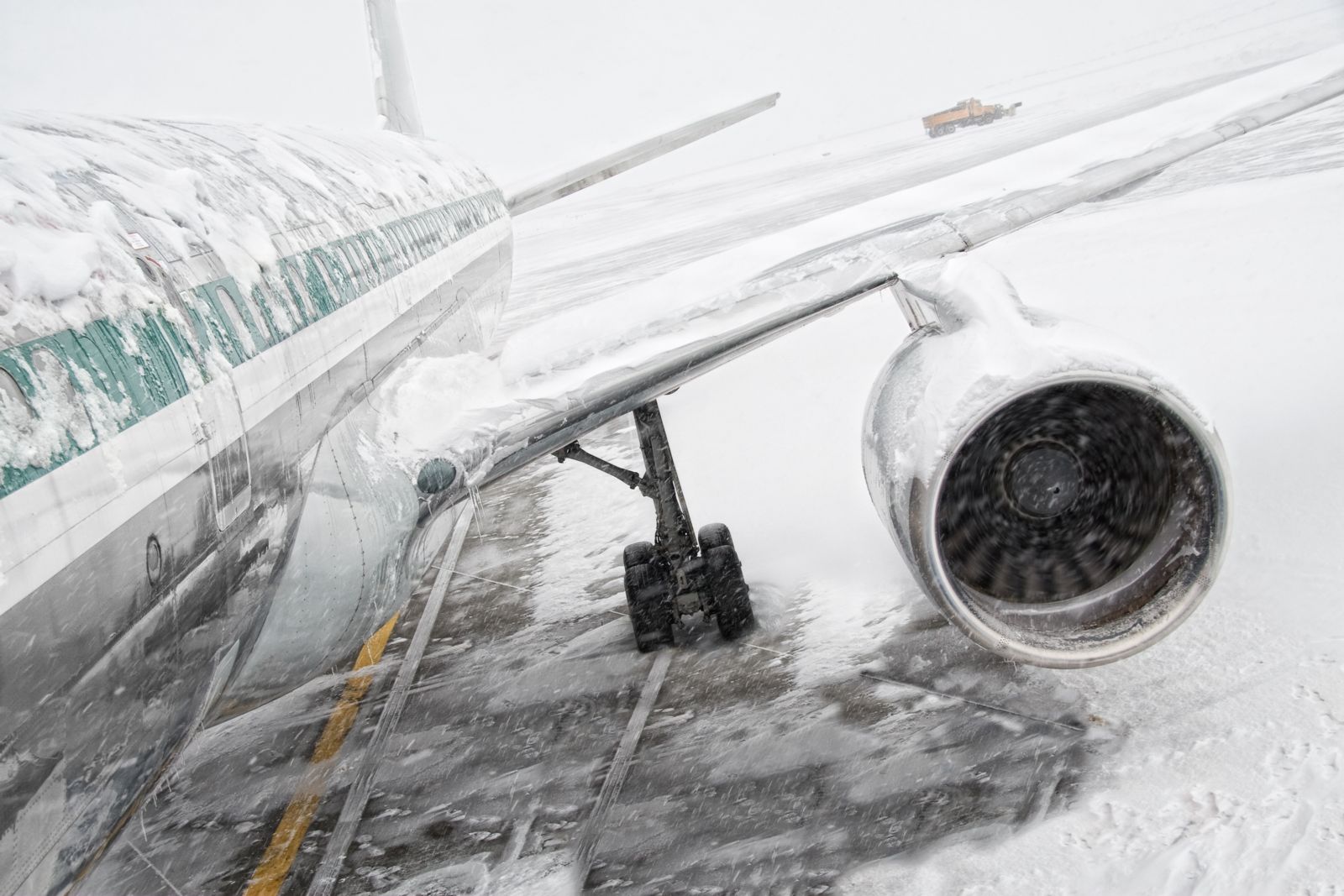 Ice buildup creates several different issues for airlines and aircraft operators. When ice accumulates on the wings or fuselage, it can change the geometry of the surface to create more drag and less lift.

A super hydrophilic approach, by contrast, would make the coating much more polar. This second approach involves having the water run smoothly away from the surface — quickly without beading up, so water beads don't have the opportunity to freeze.

“The water is basically removed from the surface at any significant angle from a horizontal surface,” says Recker. “That's been seen to have some potential — high potential at that.”

A super hydrophilic coating would protect against several different types of ice, including frost, rime, ice rain and even snow, even though each one has a slightly different mechanism to adhere to surfaces.

If the third approach is successful, Recker says, “That may be all you need. You have a thin layer of water that allows for any significant type of ice, snow or frost buildup to basically slide off the substrate due to that thin water lubricant interface.”

Due to exacting safety standards in the aerospace industry, BASF will be testing each method thoroughly to make sure they confer the best possible benefits to the end user.

Reaching the end of the ice age

Though BASF is currently focused on aerospace applications, Stewart says icephobic technology could also find applications in the marine market.

“When you're out on a ship in freezing temperatures, the water that gets exposed to the deck surfaces could be problematic from a safety standpoint.” She adds that the process of mitigating ice formation on topside decks can be labor-intensive, and the marine industry could benefit from a similar type of icephobic system to the one BASF plans to use in the aerospace market.

The technology may also have utility in consumer markets, such as gutter and roof coatings. In those cases, an icephobic coating could help to reduce ice blockages in gutters and ice buildup on roofs.

Another possible application is the power market. For instance, ice buildup can cause maintenance issues with wind turbine blades and motors. It can also lead to power outages and breakages with power lines and towers. Icephobic coatings could potentially reduce the need for expensive repairs in these situations.

Stewart notes that, once the BASF team identifies the best pathways to bring its icephobic technologies to market — and works with manufacturers to ensure the systems are compatible with the formulations they're going into — they will be better positioned to expand into adjacent markets that are impacted by an unsafe environment due to ice.

“There's a lot of potential for this type of technology,” says Stewart. “We're excited about where we can take it.”

*Claims or positions expressed by sponsoring authors do not necessarily reflect the views of TPC, PaintSquare or its editors.
SEE ALL CONTENT FROM THIS SPONSOR
Tweet
ADVERTISEMENT